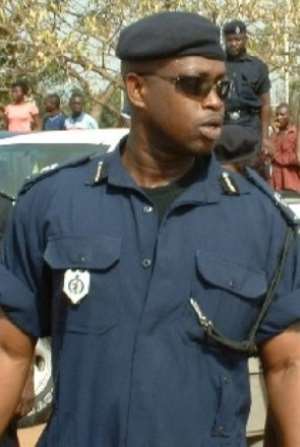 The Inhabitants of Sepe Timpom in the Asokore Mampong Municipality of the Ashanti region say they feel insecure living in the area because of the sudden surge of armed robbers there.

They complain of how thieves attack them and take away their belongings.

A 55 year old woman Aunty Agie was recently attacked by some unknown armed men who succeeded in inflicting machete wounds on her back and right shoulder. The robbers also made away with her mobile phone and an amount of twenty Ghana cedis.

According to the victim, it was a rainy evening when the robbers entered her house and ordered her to hand over to them her mobile phone and the money she had on her. She indicated that she succumbed to the robbers’ demand and gave out the items. She said one of the robbers hit her shoulder twice with a machete and another member of the gang also inflicted machete wounds on her sister who shouted for help.

“It was around 7:15pm and I was relaxing here with my sister who paid me a visit. All of a sudden I felt a poke on my shoulder. So I thought it was one of my children but to my surprise it was a stranger who asked me to show him what I had in my hand and I showed him the phone and after he took the phone he hit my back and shoulder with the machete. My sister then shouted thieves and the other one hit her with his machete. We tried shouting for helping but because it was raining no one could hear our cry,” she narrated.

She added that, they have lodged an official complaint at the Asokore Mampong Police Station and investigations are yet to begin.

Aunty Agie fears their plight could worsen if the police do not come in to help them.

Another victim in the area also tells a story of how he escaped an attack when some unknown men pounced on him.

He said it was around 5:30 am after he had seen his father off and returning to the house when some unknown persons rushed on him and engaged him in a struggle and he tried to escape.

The area is located close to a forest on the extended airport land where the residents believe is the hideout for these criminals.

The community members have begun mobilizing the youth in the area to form a watchdog committee which will provide internal security for the residents.

The residents are therefore appealing to the police to intensify patrols in the area to clamp down the criminal activities.