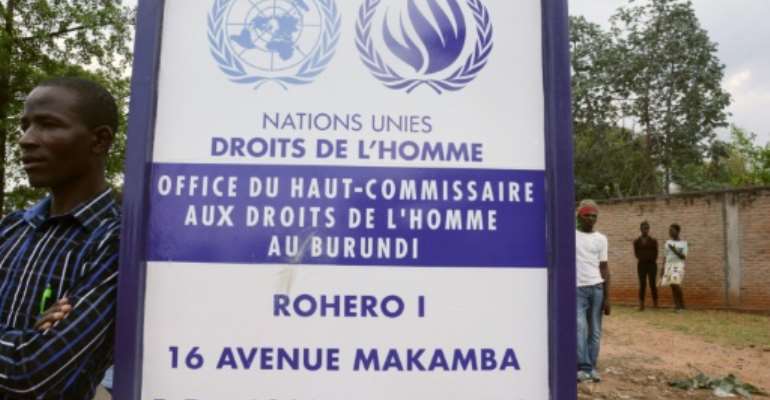 A man stands by a sign outside the UN Commission on Human Rights headquarters in Burundi as people demonstrate against the EE, the ICC and the Resolution against Burundi in Bujumbura on October 8, 2016. By (AFP/File)

Nairobi (AFP) - Burundi's move to leave the International Criminal Court (ICC) has turned the spotlight on months of political turmoil and violence that raised fears of "genocide" in a nation with a history of ethnic conflict.

Here are some keys to understanding 18 months of crisis in the central African nation:

How did Burundi's crisis begin?

In April 2015, President Pierre Nkurunziza, in office since 2005, announced his plan to run for a controversial third term, triggering protests which authorities banned before unleashing a bloody crackdown that left an estimated 80 people dead.

In May, a botched military coup prompted further reprisals against anyone seen as opposing the government.

Despite the protests, Nkurunziza was re-elected in July in polls boycotted by the opposition.

The crisis continued however despite his victory and in September 2016 a report by United Nations rights experts said repression had become "more systematic and is increasing."

Human rights groups allege that over 1,000 people have been killed in the months of turmoil, while thousands more have been tortured, suffered sexual violence, disappeared or been illegally detained.

The UN refugees agency (UNHCR) says more than 250,000 people have fled the country. 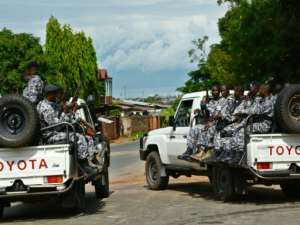 Burundian security forces patrol the streets of Bujumbura in April 2016

What does it mean for Burundi?

Hutus make up around 85 percent of Burundi's 11 million people, with Tutsis being the remainder.

There are now concerns of a return to Hutu-Tutsi violence and fears for stability in a region where violence often spills across borders.

Many are wary of using the word "genocide" yet it repeatedly crops up in analyses of Burundi's crisis. 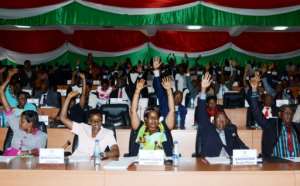 Members of Burundi's National Assembly vote on October 12, 2016 for the withdrawal of the International Criminal Court (ICC) from the capital

The international community remains traumatised by its failure to prevent the 1994 genocide in neighbouring Rwanda -- which the UN says left 800,000 mostly Tutsis dead -- and involved the same ethnic groups as in Burundi.

Perhaps as a result, there have been repeated pleas from the UN and African Union to avert genocide in Burundi.

"Given the country's history, the danger of the crime of genocide also looms large," warned the recent UN report.

While Tutsis were among the most vocal critics of Nkurunziza's third-term bid, the current crisis remains primarily political, with the anti-Nkurunziza alliance cutting across ethnic lines. However, public discourse has taken on an increasingly ethnic tone.

In August, UN Special Adviser on the Prevention of Genocide, Adama Dieng, raised concerns over a statement by Burundi's National Assembly president, Pascal Nyabenda, who claimed the Rwandan genocide was a "fabrication of the international community".

Dieng said the statement has "the potential to inflame ethnic tensions, both within Burundi and outside its borders."

In April 2016, International Criminal Court (ICC) prosecutor Fatou Bensouda said she was conducting a "preliminary examination" of the situation in Burundi -- the first step towards a full investigation and possible prosecutions -- looking into allegations including murder, torture, rape and forced disappearances.

Burundi responded by voting to leave the ICC saying there was a "plot to do harm to Burundi".

Bujumbura also barred the three UN rights experts responsible for the damning September report and suspended co-operation with the UN Office of the High Commissioner for Human Rights (OHCHR), accusing it of "complicity" in the "dishonest report".