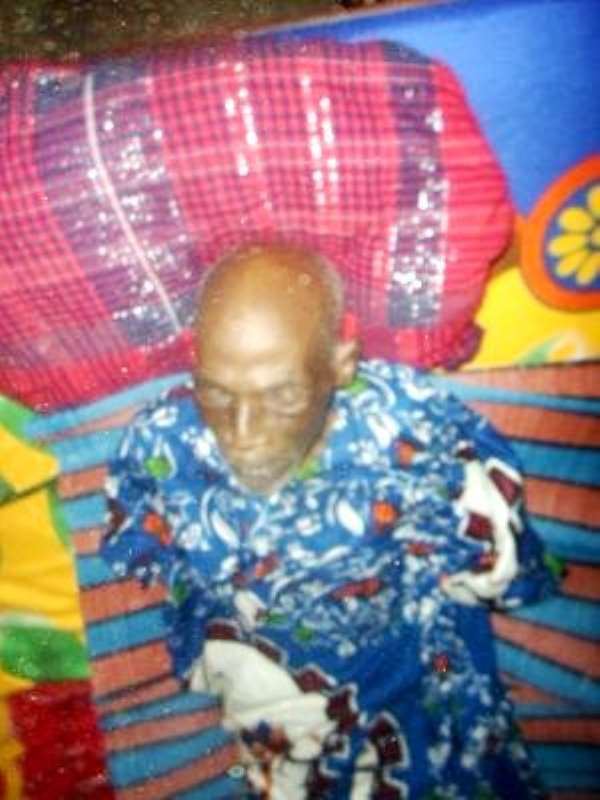 The world oldest man, Chief Gabriel Umeh Enemou is dead at age of 151. Chief Enemuo is a World War (1&2) veteran, born in the family of three as a first child, yet he had outlived his younger brothers, age mates, co-comrades among others.

According to the reports reaching this reporter today, Chief Enemou died on 28thApril, 2015 at 9:58pm, and was buried on 29th at exactly 12pm after holy mass held at his compound at 10am, but the date of his funeral rite is yet to be announced.

A devoted Christian (Roman Catholic), Chief Enemou who receives Holy Communion regularly until his death, died of old age, without any form of ailment.

Speaking to news48hrs.blogspot.com, the deceased most senior son, Mr. Paul Umeh described his departed father as a hero and a man of great honour worth to be emulated.

While speaking in a church service before he was committed onto the mother earth, the Parish Priest, St. Joseph Catholic Church, Ebenebe, Rev. Fr. Aloysius Ezeanolue extolled the lives of ‘brother Gabriel Enemou’ as he was fondly called by Ebenebe catholic community, as a true faithful Christian.

In his tribute on facebook, one of the grand children of Chief Enemou, Mr. Bonaventure Umeh wrote:

“Oh papa we love you but God love you most, you are a good Father 2 me and 2 EBENEBE people you are the oldest man in EBENEBE, Anambra and also in Nigeria. We all the Igbo na asi gi Ije oma (sleep well). EBENEBE na asi gi mgoo. ENEMUO UMEH you are a good man, papa you always share what you have with all; papa you never stop 2 offer kola whenever person com 2 see you , even at your old age. Whatever you give to papa, he will be appreciate. Papa is always happy whenever he see people around him. Papa always pray every morning 4 the good of EBENEBE, good of Anambra and also 4 the good of Nigeria. He always like 2 Bless people when ever dem com 2 see him, papa give up on 28night Apr 2015, oh I will always miss you as my grand Father I love you papa but God Love's you most people of EBENEBE will miss u as the oldest man, A man who love 2 say the truth, Chif OZU OKutarozura Ijeoma Mgoo.

Read the formal report and full detail of Chief Brother Enemou as captured by our publisher here: below…..

You need to know him!
The most interesting and intrinsic aspect of his life is that while millions men and women of 60s, 70s, octogenarians and centurions walk with aid of sticks and helpers, Chief Enemuo walks round his compound, eat, take bathe among other things without even an aid.

In that special interview with our publisher, Okechukwu Onuegbu, Enemou said: “I have children, grandchildren and lots more, but I need none to assist me in walking round my compound. I knew that many people would be willing to offer help if requested for. But I needed not because I am still healthy, full of strength and energy. My bones, artillery, blood, veins and heart are intact… In fact, I am still sexually induced. I can still have sex”.

Investigation suggests that the patriarch is not only the most senior indigent citizen of his community, but also the oldest man in Awka north and south federal constituency, and perhaps the world's oldest man world-wide.

When this reporter paid him an impromptu visit recently, the patriarch recounted his past life for hours without hesitation.

“I am Chief Gabriel Umeh Enemuo, I clocked150 years this yesterday. I was my parents’ first issue. My education ended at standard 2 in order to assist my parents in upkeep of my younger brothers Nwankwo and Micheal Nwabu of blessed memory. As such, I joined my father in the farm. We farmed yams, fishing and hunting, while my mother and young ones were busy in cassava farming and rest of them. However, the Oyibos (the Britain) lured them into allowing me to be conscripted into the Royal West African Frontier force during the first and Second World War”, he said.

He added: “We traveled far and near… but due to old age, I can’t just recall the places visited during the war except that I saw red sea written in the bible. Next thing afresh in my memory is that I returned and re-embraced my parents, younger and beloved ones at home alive. They were very happy welcoming their ‘lost son’ again. It was indeed a very great opportunity and experiences. That war wasn’t easy at all. Shooting sporadically day and night at different locations without resting, which may be why my people celebrated my safe return”.

Additionally, Chief Enemuo noted: “My people celebrated me with love, care and honour. You knew they might be thinking that I would not survive the war front. But, fortunately, God saw me through. So, immediately, they took to streets dancing and jubilating as done to the biblical prodigal son. My parents later vowed not to let me out of their presence again. My father was already old. I had no option than to develop myself more in farming so as to train my younger ones”.

Still recounting his experiences, the World War (1&2) veteran echoed: “Don’t just go there. Oyibos attitudes to the blacks (Africans) are nothing to write home about…Brother, please don’t pray for war. You people should keep praying for our soldiers in your daily devotion because it is not easy at all. Many Africans died at the war whose course and reason we were ignorant of. I just thank God I came back with all parts of my body intact”.

When asked the secrecy behind his longevity, Chief Enemuo echoed: “Glory be to God. It isn’t my making but that of Almighty God. I never thought it would be so but God decided to let me be. I was born in poor family of three children. I was the first born. My younger brothers are now late. Also, none of my mates is alive. All I have to say is that my parents-all died at ripe age of 185 or 190 each. And their parents was said to have outlived them. Unfortunately, my wife and young brothers could not”.

Queried if food contributes to his sustenance, the patriarch explained: “it is not food but God. To Him be the Glory forever. I am young as you’re. Can’t you see that my strengths, bones and blood are yet alive? Feel it, I am very energetic… I now eat all kinds of food-junks such as salad, indomie, spaghetti, macroni, semovita, rice, wheat, meat, fish, sumptuous meals and our traditional like akpu, garri, rice among others. I have no favourite dish except in the past I ate “pounded corn” as a titled man concern. You know I am a titled man. I joined our traditional Ozorship a teenager, first before any of my mates could be initiated. This was as a result of my generosity, industriousness, love and humanitarian services to the people”.

Chief Gabriel Umeh Enemuo posited that he was first man to have built a house with cement blocks and star zinc while Atani (grass-roofing) and mud thatched house was reigning in major parts of the country . Hear him: “Yes, I built these six bedrooms and a parlour we lives-in. That was first house built in Ebenebe with cement blocks and zinc. Look at it very well (pointing to our reporter), it was roofed with “Star zinc” which was then reigning at the cities of Enugu, Onitsha, Portharcourt. The cost price, I wouldn’t recall but shillings and pounds were in use as at then”.

Continuing, he said: “ I bought the zincs at Enugu. But with help of my family members, they were transported back to Amansea by head. From there, we crossed it over Ezu-River by boat and headed them back home”.

This most senior indigent citizen of Awka-North and South, said he decided to worship Christ in the spirit and soul not that he was forced to do so by anybody, stressing the needs for people to forgo every unrighteousness and give their life and time to Christ as such evil could deny them access to heaven, even as he advised Nigerians to stop neglecting agriculture, entrepreneurship and vocational jobs/handwork with a view to face-out unemployment in the country. However, Chief Enemuo who now preferred to be addressed as “Brother Gabriel”, said he embraced Christ at old age and was wedded with his wife, Mrs. Mary (who died three years ago) at St. Joseph Catholic Church, Ebenebe by its Parish Priest, Rev. Fr. Joachim Ezeani amidst jubilation ever witnessed in his life time.

He thanked Governor Obi for constructing Ezu-Bridge, Ebenebe road and for initiating the payment of five thousand naira stipends per month to the aged of whom he is among, even as he urged the incoming administration to sustain Obi’s legacy as well as to ensure that said road get to Ugbenu, Ugbene and Awba-Ofemili as stipulated in the project.

Picture captions: Chief Enemou (his corpse, while still alive, in a picture with his grand children, his corpses, and while receiving food from his daughter before death)

The writer Okechukwu Onuegbu is a journalist, blogger and author. You can reach him through +2348061506936, facebook.com/comradedevoice, www.news48hrs.blogspot.com, or [email protected]