By Samer al-Atrush and Haitham El-Tabei 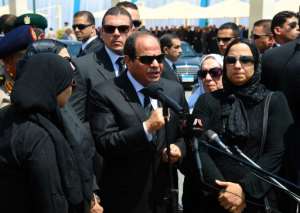 Hisham Barakat died in hospital after a car bomb tore through his convoy in Cairo on Monday morning. He was the most senior official killed by Islamist insurgents who have bedevilled the country.

The attack, as Barakat was en route to his office, was a blow to former army chief Sisi, who won elections after ousting Islamist President Mohamed Morsi on July 3, 2013.

"The arm of justice is chained by the law. We're not going to wait for this. We're going to amend the law to allow us to implement justice as soon as possible," Sisi said in a televised speech surrounded by Barakat's mourning relatives.

"Do courts in these circumstances work? Do these laws work? They work with normal people," said Sisi, shaking a clenched fist for emphasis.

Later on Tuesday, gunmen shot dead a policeman outside a small museum south of Cairo, and three suspected militants died in an accidental car explosion in Cairo, police said.

Since Morsi's ouster, hundreds of policemen and soldiers have been killed by militants based in the sparsely populated Sinai Peninsula. The Islamic State group's affiliate there has claimed responsibility for the deadliest attacks.

At least 1,400 people, most of them Morsi supporters, have been killed in a police crackdown on protests.

Meanwhile, thousands of people, mostly Islamists but also including secular dissidents, have been jailed and hundreds sentenced to death. Morsi himself has been sentenced to die.

Seven have so far been executed. Most of those sentenced to death are appealing the verdicts, a lengthy and convoluted process, but Sisi suggested it would be fast-tracked.

"We're not going to wait five or 10 years to try the people killing us," he said.

Outside the mosque where the funeral was held, a crowd of 50 protesters chanted: "The people demand the execution of the Muslim Brotherhood."

"The ball is now in the judges' court. Take your revenge using the law. Effective, swift law that doesn't take five years."

Politicians and pro-Sisi media -- virtually all the channels and newspapers in Egypt -- have called for an even harsher crackdown on Morsi's Brotherhood and militants.

Rights groups and liberal politicians have warned of a further erosion of human rights.

A newspaper editor and former parliamentarian close to Sisi said he expected a raft of toughened laws to be presented at a cabinet meeting on Wednesday.

"Should we wait for years for terrorists to remain on trial until the issue is resolved? We are in an exceptional period. You protect human rights by fighting terrorism," he said.

Television host Ahmed Mussa, who is close to the security services, attacked human rights advocates in an angry monologue after Barakat's assassination.

"Respect for the constitution and the law and basic human rights is actually a key requirement to win the war against terrorism," he told AFP.

"You only create new extremists by this kind of haphazard measure that is only a kind of angry reaction rather than a serious consideration of the problems involved."