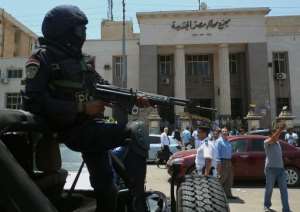 Cairo (AFP) - Egyptian police said Saturday that four Islamists were killed in an accidental explosion while preparing bombs south of the capital.

Police said the suspected militants were members of the blacklisted Muslim Brotherhood movement of former Islamist president Mohamed Morsi, whom the army toppled in 2013.

The explosion took place on Friday on a farm in the province of Beni Suef south of Cairo, the interior ministry said in a statement.

Police found bomb-making materials at the site, the ministry said.

Morsi's overthrow, prompted by mass street protests against his year-long rule, was followed by a deadly crackdown on his supporters and a surge in militant attacks on police.

His Muslim Brotherhood has been banned and designated a "terrorist" organisation, although the once-powerful grassroots movement says it eschews violence.

Morsi was detained after his ouster and this month sentenced to 20 years in prison for abuses against protesters during his presidency.