Garages to be certified for seatbelt installation in commercial vehicles 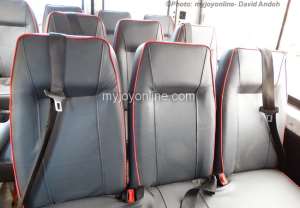 A certification programme has been instituted for selected garages across the country whose personnel will be engaged in the installation of seat belts in commercial vehicles.

According to the Driver and Vehicle Licensing Authority (DVLA), this will involve inspection of workshops of the artisans under the Ghana Association of Garages, whilst some institutions, including the KNUST, will be involved in research and development of standards in fitting the belts.

“Once these are done, we are also sure that the vehicles whose belts have been fixed, are fitted with expertise so that at least when it comes to incidents such as crashes the benefits of the seatbelts will not be denied anybody,” says Rudolf Beckley, CEO of DVLA.

The project on mandatory seatbelt use started last year after the activation of the Road Traffic Regulation 2012, which has the goal to ensure Ghana is the safest destination for road safety.

Almost 165 artisans from various garages across the country have so far been training in the programme implementation.

Mr. Beckley says there should be adequate skill sets and knowledge in enforcing the seat belt installation from June 1, 2015.

At a training workshop in Kumasi for identifiable members of the Garages in the Northern sector, some of the mechanics have employed the DVLA to ensure adequate availability of the mandated seat belts.

The DVLA says it has initiated a procurement process, in collaboration with the Garaged, to purchase the requisite seatbelts to be fitted in the over 500,000 commercial vehicles in the system.

Transport operators would be required to patronize the certified garages in fitting the seatbelts.

According to Mr. Beckley, the various transport unions are spearheading the public education process on the installation and use of the seatbelts.

The DVLA has ceased registering new vehicles without seat belts since 1st September, 2014.

The Authority, together with the National Road Safety Commission (NRSC) is increasing public education for the enforcement of the use of seatbelts to commerce on 1st December, 2015.

The police command has stated its resolve to leave no stone unturned in enforcing the installation of seat belts in commercial vehicles.

Ashanti Regional Police Commander, DCOP Kofi Boakye, says there will be no fear nor favour in the implementation of the law.