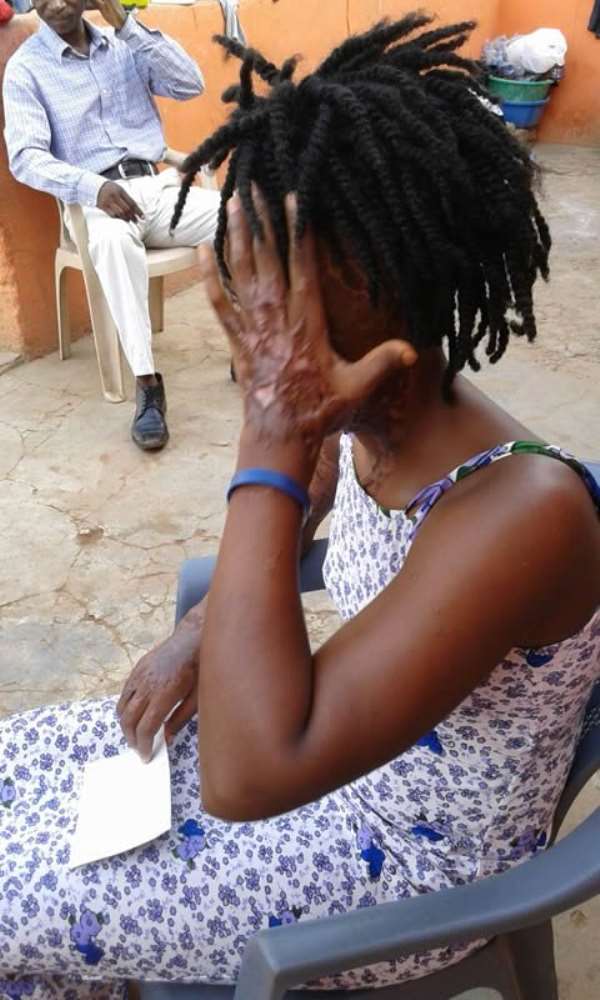 22-year-old Anita Otema has lost her left eye while her right hand is also severely burnt from an acid attack on her by her ex-boyfriend.

The skin on Anita's thighs and neck were not spared either in the violent chemical assault on her at her Abeka Lapaz residence.

Narrating the gruesome incident to Joy News' Beatrice Adu, the now disfigured lady said her ex-lover's action was motivated by a pastor.

According to Anita Otema, a few days prior to her ordeal, her ex-boyfriend, Kwabena Fosu, known popularly as Abodeman, told her a pastor had revealed to him that she is behind his recurrent ill-health.

Anita explains that Abodeman claimed the pastor had revealed to him that she (Anita) was making money spiritually through his frequent sicknesses.

Angered by this 'spiritual diagnosis' of the cause of his ill-health, Anita's ex-boyfriend walked into the home of his ex-lover at dawn and poured the corrosive chemical on her while she was still deep in sleep.

Anita and her family had apparently been sleeping in the open because the ongoing scheduled blackouts made sleeping indoors uncomfortable.

The Police are yet to arrest 28-year-old Kwabena Fosu.

Meanwhile, the family of the 22 year old lady is currently struggling to raise money to pay for the cost of her reconstructive surgery. Anita says living with the burns at her compound house is unbearable because of the frequent piercing stares from her neighbours.

Doctors say Anita needs about GH¢15,000 for her reconstructive surgery.

The Director of National Reconstructive Plastic Surgery and Burns Centre at the Korle Bu Teaching Hospital, Dr. Opoku Ware Ampomah, has revealed that his outfit receives about eight of such chemical attack cases annually and about 90% percent of victims are women.

Don’t give me reason to close down schools again – Akufo-Add...
12 minutes ago