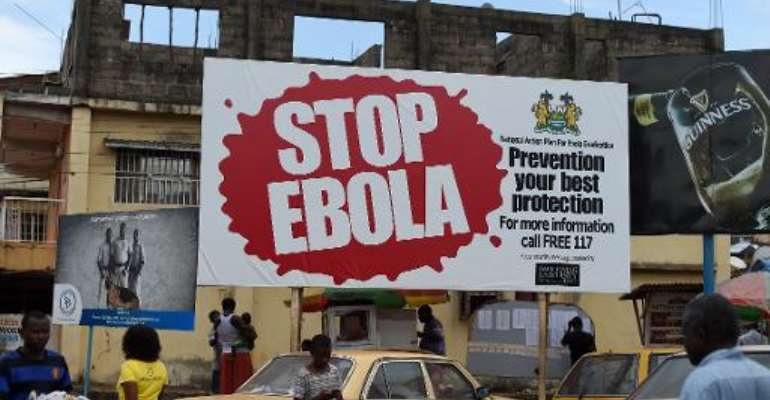 People walking past a billboard reading "Stop Ebola" in Freetown, on November 7, 2014. By Francisco Leong (AFP/File)

Freetown (AFP) - Sierra Leone imposed a three-day nationwide lockdown Friday for the second time in six months in a bid to prevent a resurgence of the deadly Ebola virus.

The country's six million people, with the exception of health workers, were to remain indoors from 0600 GMT Friday to 1800 GMT Sunday on orders from President Ernest Bai Koroma.

The typically bustling capital Freetown was deserted as the order took effect, with markets, businesses, banks and office buildings shuttered. The only vehicles seen on the streets were driven by healthcare workers.

The lockdown was called over fears the disease that has killed about 3,700 out of 11,800 people infected in Sierra Leone was making a comeback in certain parts of the country.

It was disquieting news after World Health Organization officials declared in January the epidemic was finally declining in west Africa after sparking a global health scare.

Following the outbreak in December 2013 in neighbouring Guinea, the disease spread to Sierra Leone and Liberia, which have together seen over 10,300 deaths since, according to the WHO.

One of the deadliest viruses known to man, Ebola is spread only through direct contact with the bodily fluids of an infected person showing symptoms, such as fever or vomiting.

As the lockdown carries on through the weekend, nearly 26,000 volunteers are going door-to-door in a national search for hidden corpses and sick people, with particular focus on hotspots in the capital, as well as areas in the north and west of the country.

"We are embarking on active case finding in all the hotspots in the country," said Palo Conteh, who is leading the government's Zero Ebola National Campaign. "We will urge residents to give the alert in cases there are emerging symptoms of Ebola."

A break in the lockdown was allowed Friday so that worshippers in the Muslim-majority country could attend the weekly prayer. Another exception is slated for Palm Sunday.

Residents who spoke with AFP by phone said they backed the lockdown, which they see as a means of ending the epidemic that decimated the country's health system and its fragile economy. Sierra Leone imposed a similar lockdown in September 2014.

"Any move that would bring down Ebola is welcome as we are fed up with the economic strain it has brought us for some eight months now," said small business owner Abdul Kamara.

Hair dresser Fatu Jalloh added: "The three-day shutdown is good. Schools are about to reopen and we need our children to be safe."

Sierra Leone is to re-open on April 14 the country's schools, shut for almost eight months to prevent the spread of the disease.

A potentially major new front against Ebola opened in Guinea on Tuesday as health authorities began a massive campaign to give people an experimental vaccination against the disease.

As it stands, there is no treatment or vaccine authorised to fight the Ebola virus, but two experimental versions -- VSV-EBOV and VSV-ZEBOV -- are being tested. The US National Institute of Allergy and Infectious Diseases (NIAID) said Thursday both vaccines appear to be safe.

The ravaged countries at the heart of the Ebola outbreak -- Sierra Leone, Guinea and Liberia -- have received some positive economic news, with the International Monetary Fund agreeing to provide around $100 million (about 92 million euros) in debt relief.