Bama: a sight and stench of death after Boko Haram defeat 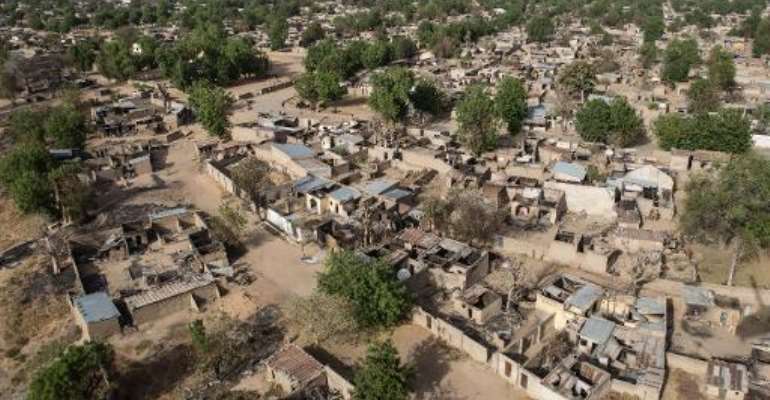 An aerial view shows the northeastern town of Bama, Nigeria on March 25, 2015. By Nichole Sobecki (AFP)

Bama (Nigeria) (AFP) - The devastation is visible from the air in Bama. Corrugated iron roofs lie ripped off among charred debris, the walls of the houses blackened with soot or in ruins.

On the dusty roads that separate properties in the second-biggest town in Borno state, northeast Nigeria, the sight -- and smell -- is much worse, with evidence of atrocities everywhere.

The Nigerian military forced out Boko Haram from Bama earlier this month. As they did so, locals who managed to escape said the Islamists set fire to homes, including the emir's palace.

But clearly much worse happened -- and the evidence is on the streets, beneath them and in the parched fields beyond.

Troops find the decomposing body of a man in a sewer, in the fetal position surrounded by trash and human waste. Soldiers cover their noses as more remains are found elsewhere.

Battle-hardened troops find the scale of the slaughter hard to comprehend.

"It's unbelievable that human beings could do this to fellow human beings," said Lieutenant Colonel Abu Bakar Haruna. "You can see on the bridge, just bodies littered.

"In the town you saw bodies all over. So it's something that someone can just say, 'why?', 'how?'. And it's a difficult thing."

Testimony previously gathered from residents who fled Bama bear witness to the horrors of life under Boko Haram's self-proclaimed caliphate after they took over the town last September.

"Bama was hell," mother-of-four Jummai Mumini recalled on March 16 in the Borno state capital, Maiduguri, 73 kilometres (45 miles) away where she fled as the military inched closer.

Others said dozens of women who were forced to marry Boko Haram fighters were slaughtered by their "husbands" before the battle began.

Dozens of women's bodies littered the streets, the Islamists adamant that they would not allow their wives to re-marry men who did not share their radical ideology, residents said.

Many of the estimated 7,500 people who fled are now in Maiduguri, in a makeshift camp of little more than a few dilapidated buildings in a clearing of neem trees on the outskirts of the city.

Many are children, the girls dressed in the long hijab and colourful print wrappers widely seen in the region, the boys in oversized men's shirts, thin-waisted jeans and worn flip-flops.

Not everyone has fled Bama, though. Those who remain have set up on pavements, prayer mats, bags and jerry cans of fuel or water spread out on the burnt earth.

Others seek shelter from the harsh sun in the shade of a burned-out car, watching and waiting as camouflaged troops roll by in armoured personnel carriers.

Off-duty soldiers languish in plastic chairs. A tank lies idle in the sand after what Haruna called "a horrible battle".

"We did our best to ensure that we expelled the BHTs (Boko Haram terrorists) from Bama, and we have successfully done that," he said.

"And by the grace of God we'll ensure that we maintain security and ward off their efforts to come into Bama again."

Security is still uppermost in the minds of both the military and locals, with Boko Haram pushed out of the town but to who knows where.

Three men discovered trying to enter Bama are blindfolded and bundled into a pick-up truck; troops carefully inspect the former emir's palace, which Boko Haram used as a headquarters.

Repeat raids by the militants are feared, despite Nigeria's military and its coalition partners Chad, Cameroon and Niger finally making gains and recapturing territory.

"You will see the level of alertness of the troops here," said Nigeria's military spokesman Major-General Chris Olukolade.

"You will see that every approach is being manned. There is regular patrol, very aggressive patrol, not just within the town but also the suburbs.

"And this is in anticipation of subsequent threats. We're not giving chances at all. This town must not fall again."

For the people of Bama, security is everything if they are to rebuild their shattered lives and allow those who fled in fear of their lives will return.

"We just need help from the government to help rebuild the town, so that these people will come back to the town," said Yakuba.