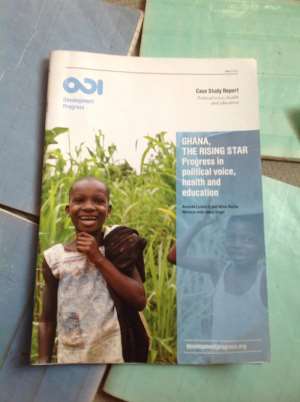 Stakeholders in the health,education and civil society sectors have met at an event in Accra,to launch a 38-paged survey report titled,"Ghana,the rising star - progress in political voice,health and education".

The survey conducted by a leading policy think tank in the United Kingdom on international development and humanitarian issues,Overseas Development Institute (ODI) aims to among other things,explore progress Ghana has made in three key areas of political voice,health and education.

Speaking at the launch,Alina Rocha Menochal - who co-authored the report,said the research about Ghana forms part of a broad project the think tank was undertaking called 'development progress' - which is particularly directed at changing the negative narrative about development in Africa and instead better understand whether development is happening around the world and how this is happening as well as the drivers of same.

According to the report authored by Amanda Lenhardt,Alina Rocha Menochal and Jakob Engel,Ghana has made remarkable progress in human development over the past twenty years while achieving one of the most stable transitions to multi-party democracy in sub-Saharan Africa.

This has been largely due to the activities of civil society,the media (described as one of the freest in the world),the people and other key indices.

Ghana was once among the lowest 40% ranked countries in terms of 'voice and accountability according to the World Bank's Worldwide Governance Indicators (WGI) ,but has since moved to join countries in the top 40%,and this the report says gives Ghana the tag of being in the 'golden age' of political voice.

Deputy Education minister in charge of tertiary education,Honourable Okudjeto Ablakwa attributed the gains Ghana has made in the education sector to the massive investments the country has made and continues to make in education.

He said,in a bid to ensure the elements of the Free Compulsory Universal Basic Education in article 25 of the constitution was achieved,his government have rolled out interventions such as the distribution of uniforms,shoes,textbooks,exercise books and the elimination of schools under trees to achieve access,quality and equity.

"If education must be compulsory and universal,we must remove all the excuses,so if a parent would not send their child to school because they cannot afford basic needs - uniforms,shoes,books,transportation among others,all these hurdles ought to be removed and that is the founding principle guiding education," he added.

Hon Ablakwa noted that education over the period has received more resources compared to the other ministries and if more tangible progress is to be seen in the sector,more resources need to be committed in order to provide quality education to the people.

However,Executive director of the Ghana integrity Initiative,Vitus Azeem noted that political voice which the report described as key to the progress in development of the country,did not reflect the situation in practice.

While admitting that Ghana had made gains in this regard,he was of the view that political voice and it's positive impact has been largely exaggerated.

He added that aspects of the indicator such as the transition from authoritarian and military rule to democratic systems,peaceful elections in the multi-ethnic setting of the country have contributed to progress,even though other aspects such as demonstrations,people's participation in political debates,press engagements among others have been weak.

Executive director of Imani Ghana - Franklin Kudjoe explained that Ghana had achieved a lot in terms of political voice looking back at Ghana's history,but the nature of Ghana's constitution leaves very little for the people.

"The nature of our constitution in spite of our democracy encourages a lot of state capture,and the reason there's a lot of vitriol and voice when it comes to elections is because the stakes are high,and whoever captures power,captures everything.

You can have a situation where a lot of people are politically active voicing their opposition and demands,but when the political class gets into office,it creates an executive system that is an overbearing one and usually does everything," he added.

He said the partnership between the elected and the electoral college was almost non-existent - and if the real sense of political voice must be achieved,it must translate into ownership of the decision-making and resource allocation processes.

In the health sector,prevalence of stunting among children under age five decreased from 35% in 2003 to 28% in 2008,while Ghana ranked 7th out of 153 countries in terms of progress of measles immunization between 1990 and 2010,the report revealed.

The Ghana statistical service report of 2009 pegged increase in child immunization rate from 19% to 70% and measles-vaccination rate stood at 91% - a figure above the regional average of 75%.

The report also indicated a significant reduction in maternal and child mortality rates,and this former Health minister and ranking member of the health committee of parliament,Dr. Richard Anane attributed to deliberate policies initiated and carried on by successive governments.

He noted that the introduction of a social engineering venture- the national health insurance scheme under the John Kufuor administration in 2001 and pursued further by successive governments,has largely played a role in achieving health stability in Ghana.

Dr. Anane said access of free health care for all pregnant women and children formed part of innovations in this regard,but over the years has resulted in some pressure on the scheme,thereby requiring a new funding regime.

Private sector participation,he added,have been key in providing financial and geographical access to the people in the healthcare sector.

The report admitted that there were challenges of quality distribution,equity,financial sustainability,inclusivity of political voice as well as making the state accountable through increased participation and democratic space, but researchers at the institute are confident with a lot more effort,Ghana could achieve more through pre-established,agreed upon and publicly countable framework of rules.

"Ghana,the rising star - progress in political voice,health and education", is one of a series of development case studies being carried out by the Overseas Development Institute (ODI) across the world.

The project,funded by the Bill and Melinda Gates Foundation,is a four-year research initiative which aims to better understand,measure and communicate progress in development across countries and to provide evidence of what has worked,examine drivers of the process and serve as a benchmark for other countries to emulate.