Rawlings is not the threat 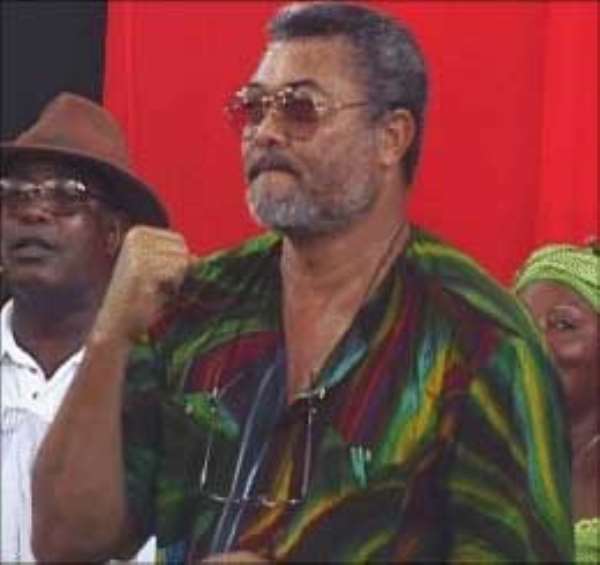 The greatest threat to Ghana's stability is not Rawlings, as many perceive the former president to be, but rather the huge amounts of cocaine and heroine that pass through the country as a transit point, according to a Research Fellow at the African Security Dialogue and Research (ASDR).

Dr. Emmanuel Anning told The Chronicle in an exclusive interview at the weekend that Mr. Rawlings' reported alleged statement that President Kufuor and his ministers were armed robbers who deserved to be arrested by the army, was no news and had no security threat or implications.

“The army is not Rawlings' natural base as people think and should therefore not perceive the content of his alleged statement as inciting the army to rise up,” said Dr. Anning.

Dr. Anning maintained that Ghana had known Mr. Rawlings and his “disappointing and irresponsible statements” for the past 20 years, therefore his latest attack on the President and his ministers must be treated as one of those statements he had been making over that period.

He said records at the Narcotic Drugs Control Board showed that Ghana was now internationally, the second most noted transit point for cocaine and heroine and this “transnational organized drugs cartel is beginning to pose a serious challenge to the country's political and security stability.”

He said when drugs were in transit certain percentage of it was left in the transit county to pay for the transaction and also to finance transnational crimes all over the world.

As a result mega drug lords could be created in the country who could influence many decisions in their favour to the detriment of the majority ordinary citizens and lead to political and security instability.

Dr. Anning said other factors, which posed a threat to a country's stability included unemployment, youth dissatisfaction and politicians making promises that they could not keep.

In a related issue Dr. Anning said this year's electioneering campaign was a little more hostile.

He attributed this to the fact that the two biggest parties, the New Patriotic Party (NPP) and National Democratic Congress (NDC), having tasted the bitterness of being in opposition, would not want to be there again and having tasted the fruit of power would always want to enjoy it.

The research fellow said although the NPP's assertion that the NDC was beating war drums, coupled with the arrest of the two NDC aspiring parliamentarians and their supporters invading the court, did not pose any security threat to the nation, such developments, however, undermined the rule of law.

“People who invade the courts and prevent the police from doing their work must be resisted and pushed back with credible force by the police,” he said.

“When the two political forces begin to abuse and undermine the rule of law, it has serious implications, because increasingly people would challenge the authority of the police and the court, and certainly the country cannot have such a situation.”

Dr. Anning criticized Mr. Johnson Asiedu Nkatsia for “his irresponsible statement that war drums are meant to be beaten.”

He said war could be there yet they were not meant to be beaten, except when necessary to go to war, adding that there was no basis for any political party to put the survival and livelihood of ordinary Ghanaians at stake.

He advised Ghanaians to examine more critically irresponsible statements by politicians “especially in this part of the world where people go into politics because of their private needs.”

He also advised the media not to report statements by politicians that could divide the nation, but must always ensure that what they put out would bring about cohesion, stability and development.