Yammin Decries Over-reliance On Government As He Praises Visionary Leaders 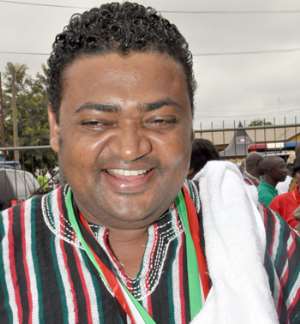 The Honourable Deputy Minister of the Ashanti Region, Joseph Yammin has praised Asantehene Otumfuor Osei Tutu II on his foresignt that caused him to introduce the Otumfour Education Fund.

The Deputy Minister says the Asantehene's vision has led to the education of several brilliant residents of the Ashanti region who hitherto would have lost the chance to higher education.

Joseph Yammin was speaking during the ground breaking ceremony for the construction of a court building for the Atwima Kwawoma District.

The project is being undertaken by the chief of Sabin Akrofuom, Nana Osei Kofi.

The deputy Ashanti regional minister commended the chief and compared his foresight and initiative to that of the great king Otumfour Osei Tutu II. He believes the siting of the circuit court in the district will greatly inure to the benefit of the people when it is completed.

He donated 50 bags of cement towards the project and encouraged the people of of the Atwima Kwawoma district to support their great chiefand shun the habit of constantly relying on the central government for all development needs.

He encouraged residents of the district to personalize the National santitation day programme which he believes will help them greatly.