By Roger A. Agana || SpyGhana.Com 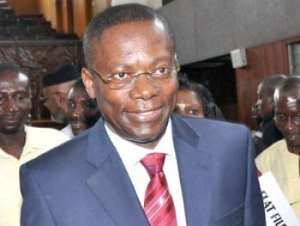 Credible information made available to SpyGhana.com indicates that the Ghana National Gas Company (GNGC) has acquired four new helicopters worth millions of dollars to man patrols on its pipeline at Atuabo and its environs in the Western Region.

The acquisition of the aircraft, according to many, was unnecessary since the about 1.3 billion US dollar Atuabo gas processing plant has not been able to end the erratic power supply currently collapsing businesses and making life generally unbearable.

Many have attributed the erratic power supply to the failure on the part of the John Mahama administration to buy crude to run Ghana's electricity generating installations across the country and not a generation problem.

Deep throat sources have hinted SpyGhana.com that the acquisition of the 4 new aircrafts is just a means by the top hierarchy of the GNGC to enrich their pockets as the company could have employed the services of local people to provide security to its pipelines which would have provided employment to the teeming unemployed youth of the area.

It is also gathered that the company has already finalized discussions with the Ghana Air Force (GAF) whose personnel GNGC will be used in handling the helicopters.

The Company has in recent times been in the press for all the wrong reasons, including paying heftily in rent for its official operations, sums reported to have increased by 500 percent. Its dealings with Chinese firm, Sinopec International Petroleum Service Corporation which revealed massive cost overruns for the company has also been criticised.

The GNGC was incorporated in July 2011 and mandated as the national aggregator of gas and responsible for the overall development of the gas sector in the Jubilee Oil Field.

It is expected to receive between 70-120 MMSCF pd of gas from the Jubilee Fields to power Ghana's electricity generating installations to provide regular supply of power for both domestic and industrial use.

Ghana is currently facing major challenges in the supply of power to consumers and most industries are resorting to laying off most of its workforce, a situation the Association of Ghana Industries (AGI) has expressed concern calling on the government to work around the clock to ameliorate the problem.

Meanwhile, the government has put in place a number of interventions to contain the problem including an addition of 1000 Mega Watts (MW) to the national grid; an agreement with US based company, General Electric as well as importation of power plants from Turkey.

The Minister of Power, Dr. Kwabena Donkor at a press conference on Monday in Accra promised to end the power crisis by the end of the year, failure of which he would resign his position in government.

The Electricity Company of Ghana (ECG) on Monday inaugurated a six-member body to draw a new load-shedding timetable since many Ghanaians have lashed out at the ECG for not adhering to its own schedule.

For now, consumers and businesses would have to brace themselves for intensified load- shedding till some of the interventions put in place by the government see the light of day.

However, when SpyGhana.com contacted the Public Relations Officer of the Ghana Gas Company, Alfred Ogbarmey, he declined making any comments but indicated that he could give answers to the issue raised if his office is furnished with questionnaire regarding the issues.

As at the time of the publication, no response was received from their outfit even though the questionnaire was sent to them.