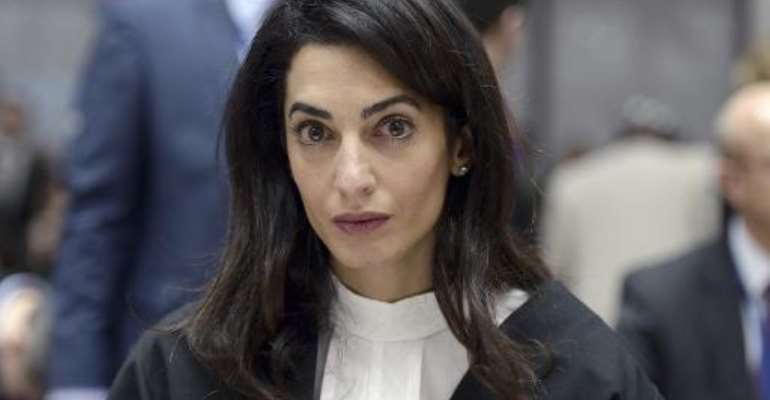 Lawyer Amal Clooney waits on January 28, 2015 for the start of a hearing before the European Court of Human Rights in the eastern French city of the Strasbourg. By Frederick Florin (AFP/File)

Cairo (AFP) - Prominent lawyer Amal Clooney has requested a meeting with Egypt's president to push for the release of Al-Jazeera reporter Mohamed Fahmy, a letter obtained by AFP on Saturday shows.

Clooney, who married Hollywood star George Clooney last year, has thrown her legal clout and celebrity behind Fahmy to secure his release.

An Egyptian government official had said that Fahmy, a Canadian citizen, would be freed soon after his Australian colleague Peter Greste was deported on February 1.

"Since Mr Greste's release, Mr Fahmy's Egyptian counsel has been informed by Egyptian government officials that his release was to follow, and that it was imminent," Clooney wrote in the letter addressed to President Abdel Fattah al-Sisi and his foreign minister.

"This was to be expected, given that Mr Fahmy has been the victim of the same injustice as Mr Greste," wrote the Britain-based lawyer who has represented WikiLeaks founder Julian Assange and taken on other high profile cases.

"Since this has not yet occurred, however, I now write to request a meeting with you, or your designated officials, as soon as possible to discuss the status of the case" she wrote.

Fahmy and Greste, along with Egyptian producer Baher Mohamed, were arrested and sentenced to up to 10 years in prison after being convicted of aiding the blacklisted Muslim Brotherhood in their coverage, a charge rights groups called absurd.

The court sentenced them to up to 10 years in prison. An appeals court overturned the verdict and ordered a retrial.

Fahmy had to drop his Egyptian nationality in order to be eligible for release under a Sisi decree that allows the deportation of foreign prisoners.

The former CNN reporter had only recently begun work for the Qatar-owned Al-Jazeera English service when secret police arrested him and his colleagues in December 2013.

Their arrests came against the backdrop of a cold war between Egypt and Qatar, which supported the Islamist movement of president Mohamed Morsi, whom Sisi deposed in July 2013.

Clooney repeated in her letter that Fahmy's detention was "illegal" and wrote she would visit Cairo to push for his release.

"Despite clear assurances that he would be released, Mr Fahmy remains in detention in Egypt," she wrote.

"I therefore plan to visit Cairo in the near future to meet with Mr Fahmy and to discuss the prospects for his release."