Mahama Has “Suffered” As President But Still Looks Good 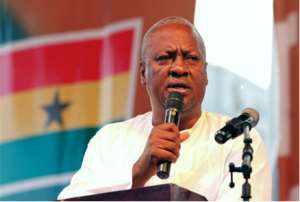 Ace broadcast journalist and OKAY FM's drive time host, Abieku Santana has described President John Dramni Mahama as the most courageous president ever in annals of the country's political history.

He explained that, unlike other past Head of States, Mr. Mahama is the only president who has gone through thick and thin in trying to achieve his aims for the country, and yet still looks youthful.

Abieku was speaking on Radio Gold in an interview with Kofi Okyere Darko (aka KOD), Friday.

“Honestly, President John Dramani Mahama is the only president who has suffered but still looks good. He is a brave man despite all the pressure. He is the man,” he opined

The award winning drive time host dared anyone, including members of the opposition NPP, to pinpoint exactly what the president has done to drive the nation backwards.

“It's strange when people say Mahama is the cause of all the problems Ghana is facing now…how possible? What exactly has he done…I dare people to come out and tell us what President Mahama has really done to destroy this country. We have all contributed to where this country is. We are all to be blame,” He said.

However, Abeiku has vowed to campaign again for President John Dramani Mahama in 2016 even though he does not buy the ideas of some of the people associated to the president.