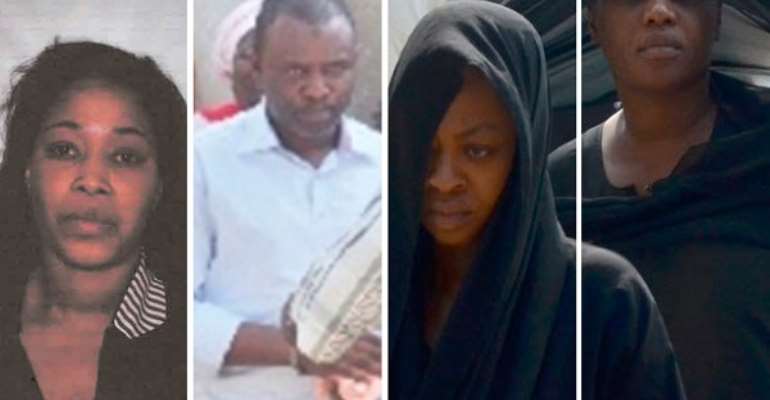 The Daily Guide newspaper says the case against six persons arrested in Ghana in connection with the 12 kilos cocaine that found its way into the Unit­ed Kingdom, leading to the arrest of Nayele Ametefe aka Angel, will be discon­tinued very soon.

The six suspects on trial are Abiel Ashitey Armah, Foreign Service Officer in- charge of the VVIP Lounge at the Kotoka International Airport (KIA); Ahmed Abubakar, Protocol Officer and Theophilius Kissi, a ci vil servant. They have all been charged for allegedly abet­ting Nayele Ametefe in the first case by allowing her to use the WIP lounge.

Sources said investiga­tions into the matter that dominated the political dis­course in recent times had long been concluded but because a powerful National Democratic Congress (NDC) government official has allegedly been implicated, the Attorney General's Department cannot push for full trial.

Thirteen persons had earlier been arrested with their photographs widely published in the state news­papers.

Ruby's Girls
Sadala Nuhu and Nana Akua Amponsah - both busi­nesswomen - who the pros­ecution says had travelled with Nayele Ametefeh but managed to escape from London back to Accra when she (Ametefeh) was arrested at the Heathrow Airport, are facing a charge of conspiracy.

Alhaji Dawood
Mohammed is also being charged with abetment.
He allegedly made tele­phone calls to the boss of the VVIP section, Abiel Ashitey Armah, to facilitate the pro­cessing and embarkation of Ruby and her 'girls,' Sadala and Nana Akua, on the BA flight through the VVIP.

Pandora's Box
Some of the accused per­sons are said to be ready to open the 'Pandora's box' by dropping the name of the senior government official involved should the state proceed to prosecute the case. It is being alleged that some of the suspects are peeved that their assets have been frozen by the state - a claim that is yet to be verified by Daily Guide.

Sources say indeed it was the said government official who personally drove Ruby and her 'girls' to the Kotoka International Airport in the evening of November 9, 2014.

It is alleged that convict­ed Ruby and the said official were in such furious argu­ment that the drug baroness left her passport at her East Legon residence and one of the two ladies on trial had to rush back to fetch the doc­ument.

Frantic Calls
Furthermore, a British intelligence source also said when Ruby was arrested, the said top official's telephone number was found on the baroness' mobile telephone as one of the last persons she had called before the BA078 flight left Accra.

Additionally, the same official was alleged to be the first person Ruby had called on arrival at the Heathrow intercepted by the British law enforcers.

They Sent 'Dante Crocodiles' To Our Area To Scarce Us — Ajum...
43 minutes ago