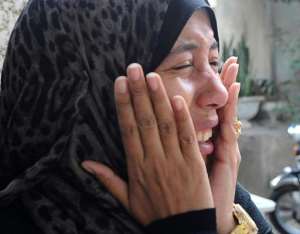 Cairo (AFP) - At least 12 protesters and a policeman were killed in unrest in Egypt on Sunday as the country marked the fourth anniversary of its 2011 uprising, officials said.

Eleven pro-Islamist protesters were killed in clashes in the north Cairo neighbourhoods of Matareya, Ain Shams and Haram, and another in the Mediterranean city of Alexandria, a health ministry official told AFP.

In central Cairo, police fired shotguns and tear gas to disperse hundreds of protesters who tried to march on Tahrir Square, the epicentre of the early 2011 revolt that ousted veteran autocrat Hosni Mubarak.

Hours earlier, two militants mistakenly blew up themselves as they tried to sabotage an electricity tower in the Nile Delta, and a policeman was wounded in a small bomb blast in the capital.

Authorities had tightened security in Cairo and other cities after Islamists called for protests against the government of President Abdel Fattah al-Sisi, the former army chief who ousted Islamist president Mohamed Morsi in 2013.

On Saturday a female demonstrator was killed in clashes with police during a rare leftwing protest in central Cairo.

Shaima al-Sabbagh, who friends said was 34 and the mother of a five-year-old boy, died of birdshot wounds, a health ministry spokesman said.

Fellow protesters said she was hit by birdshot when police fired to disperse the march. Prosecutors have launched a probe into her death.