GBA: Speaker did not err in refusing to be sworn-in as Prez 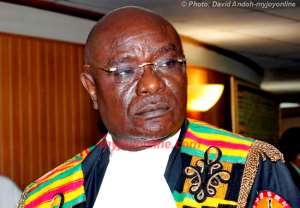 The Ghana Bar Association (GBA) has defended the decision of the Speaker of Parliament, Edward Doe Adjaho, not to take the oath of office again as acting president.

President of the Association, Nene Amegatcher, in an interview with Joy News' Beatrice Adu insists the Speaker was right in declining the offer to be sworn into office to act as president in the absence of the president and his vice from Ghana.

In line with the Constitution, the Chief Justice Theodora Georgina Wood on two occasions last week went to Parliament to swear-in the Speaker in the absence of the president John Mahama and his vice Paa Kwesi Amissah-Arthur.

But on both occasions, Doe Adjaho refused to be sworn-in despite accepting to act as president.

He told Members of Parliament there was no point in repeating an oath he had taken in September 2013.

That action triggered a huge controversy with some lawyers accusing the Speaker of treason.

The Editor of the New Crusading Guide newspaper Kweku Baako Jnr is on record to have described the Speaker, the Chief Justice and all who decided not to swear-in the Speaker as being constitutionally lawless.

A US-based lawyer, Kweku Asare has questioned the conduct of the Speaker, demanded explanation from the Chief Justice and proceeded to the Supreme Court for interpretation.

The same lawyer had in 2003 secured a ruling in the Asare v Attorney General [2003-4] SCGLR 823, case on the subject. The Supreme Court held that “the purposive interpretation to be given to Article 60(11) is that where both the President and the Vice-President are absent from Ghana, they are to be regarded as unable to perform the functions of the President and thus the Speaker is obliged to perform those functions.”

Thus, when President Mahama was in Burkina Faso and Vice-President Amissah-Arthur was in India, both performing official functions, the Constitution, as interpreted by the Supreme Court in Asare, deemed them unable to perform their functions. In turn, this required Chief Justice Georgina Theodora Wood to administer the oath to the Speaker to allow him to perform the functions of the President, as stipulated by Article 60(11)-(12).

Kweku Asare is convinced the decision by the Speaker and CJ is in contravention of the law but the President of Association of Lawyers believes the Speaker of Parliament was right in declining to take the oath.

At the seventh Annual Chief Justice Forum,  the President of the Association, Nene Amegatcher said Doe Adjaho did not err.

He quoted Section 3 of the Oaths Act 1972 which said: "No person who has duly taken the oath of allegiance or the judicial oath shall be required again to take that oath on appointment to any other office or on any other occasion."

"In effect once you have taken an oath for a particular office and you are being appointed to perform some responsibilities in that office you are not obliged to take a second and a third oath.

He said that law is still applicable and is not inconsistent with the 1992 Constitution.