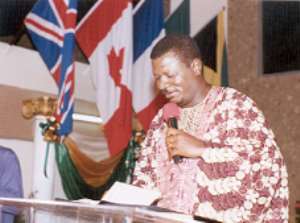 Folks, anytime I hear Ghanaian "Men-of-God" opening their mouths wide to talk about corruption or to blame the Mahama-led administration for not enforcing the laws of the country to rid the society of corruption, I cringe. I do so because I know that deep down them, they don't see themselves as part of the problem. They are good at gushing out what I call "exalted gibberish" that discerning minds don't regard as worth their bother.

Here is the latest on the block, coming from Dr. Mensa Otabil, the General Overseer of the International Central Gospel Church (ICGC), who is no stranger to us. He is reported to have said that "Corruption is simply a failure of the application of the law".

Speaking at a public forum on confronting corruption, organised by policy think tank - IMANI and pressure group Occupy Ghana, Dr. Otabil said until the law bites, corruption would never be eradicated from our society.

“If you go to other countries people religiously file their taxes at certain points of the year, it is not because they are more patriotic but it is because they are afraid of the law, until the law bites corruption will never be eradicated, it is a failure of law.

“Until we make the law work this discussion has no future, the question is who makes the law work?” (See: http://www.ghanaweb.com/GhanaHomePage/NewsArchive/artikel.php?ID=334691)

His claims were reinforced by Manasseh Azure of MultiMedia, to whom is credited the statement that one will be a fool to say that there is no corruption in Ghana.

I am glad that Mensa Otabil could bring in the issue of TAX obligation to support his claim. I have just one question for him: How much tax does he pay to Ghana from all the mercenary religious work that he does? Don't tell me that there is no law in the country to tax religious organizations and, therefore, he is not obliged to pay tax.

When Jerry Rawlings attempted introducing measures for churches to pay tax, Mensa Otabil and other vociferous so-called "Men-of-God" rose up against him. The Rawlings government had already done so to incur the anger of lawyers (who were not paying tax before he took them on). They haven't forgiven him ever since.

In effect, then, "Men-of-God" like Mensa Otabil, who have made untold wealth from plying their faith, don't pay tax on their earnings; they live in insulting opulence; and they seek to catch public attention wherever they are. They have huge investments in many economic ventures and reap windfall profits to sustain their extravagance and bloat their ego. We see them in their stinking opulence.

In their holier-than-thou public posturing and self-righteous utterances, they really annoy us.

As for Manasseh Azure, a Ghanaian journalist who cannot survive without "Item 13" ("Solidarity" or "Soli" that is a glaring instance of corruption---palm being greased for news items to be favourably written for those greasing the palms), the least said about his childishness, the better.

These characters allowing themselves to be used for prosecuting jaundiced political purposes will come to realize too late that they have chosen the wrong cause to fight.

Yes, corruption is endemic in human society, not only in Ghana, and has to be fought collectively. Why are the Mahama-haters not able to join hands to do so but are quick to point their gossipping fingers at the President and his team as if they are the prime movers of corruption in the country? Can the Mensa Otabils tell us what their input for fighting corruption is? Or are they simply satisfied with themselves through their vacuous public outbursts aimed at undermining the integrity of the President and government that they hate?

What did Mensa Otabil tell the world when Kufuor was in power, superintending over schemes that promoted corruption? Or when Kufuor refused to act on press reports of corruption among his government functionaries, referring us to the prevalence of corruption even in Adam's days?
All of a sudden, he has found his tongue and is wagging it to create the unfortunate impression that the Presidency is choked and buried in corruption. Why the Presidency, anyway?

Mind you, there is nothing wrong with any call for the implementation of the country's laws to stamp out vice; but there is a lot wrong if such calls are tainted with venomous political rhetoric to create the damning impression as is been done by characters like Mensa Otabil, who are hurting to see their preferred political front languishing in opposition and not ensconced at the Presidency to do their bidding. Did we not see how they roamed and strutted about in the corridors of power when Kufuor was in office? Tweeeeeeeeeeeeeeeeeea!!

Until the so-called "Men-of-God" of Mensa Otabil's type remove the beam from their eyes before attempting to remove the mote from others' eyes, they will remain on my radar screen as obnoxious hypocrites and misguided political activists in cassock to be ridiculed. To hell with their stinking rabble-rousing agenda!!

That agenda is o some of us: using street demonstrations to provoke public anger against the government while mobilizing their so-called “interrectuals” to use public forums of the sort organized by this IMANI shit-tank to appear to be doing some “brainy” work on issues to create the impression that they know how to dissect national problems. Even then, they aren't offering any solution. It's all blah-blah-blah!!

A responsible opposition will not only blah-blah-blah and bleat but will offer SOLID solutions for the citizens to know that it can do better than the incumbent and must, therefore, be given the nod at the polls. All that is coming from this NPP camp (that is where Mensa Otabil and Co. belong) is a series of nauseating gibberish. Countries are not built with this kind of “exalted gibberish” and open display of notoriety.