By The Golden Baobab Prize 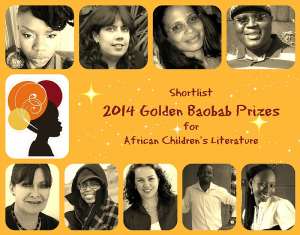 Accra, November 2, 2014 – The Golden Baobab Prizes have announced their shortlisted writers for 2014. Established to inspire the writing and publishing of African stories that captivate the minds of children, the prizes award $20,000 to talented African writers and illustrators. The prize package also includes publishing and training opportunities to honorees.

For the 2014 Prizes for Literature, Golden Baobab received 210 manuscript submissions representing 13 African countries. After going through Golden Baobab's 13-week evaluation process which is renowned for its rigor, the shortlist features 3 writers from South Africa, 2 from Ghana, 2 from Kenya and one each from Nigeria and Zimbabwe.

• Mandy Collins (South Africa) – There is a Hyena in my Kitchen

Speaking on the occasion of the shortlist's announcement, Golden Baobab executive director, Deborah Ahenkorah commented, “Our esteemed judging panel has a tough job ahead and we wish them all the best! There are many wonderful stories in the shortlist this year. We are proud of the writers who have made it this far and wish them all the best! It is an honor for us here at Golden Baobab to play a small role in their writing careers.”

ABOUT THE GOLDEN BAOBAB PRIZES
The Golden Baobab Prizes were established in July 2008 and inspire the creation of African stories by gifted African writers and illustrators to captivate children's minds. The Prizes invite entries of unpublished stories and illustrations created by African citizens irrespective of age, race, or country of origin. The Prizes are organized by Golden Baobab, a Ghana-based pan- African social enterprise dedicated to creating a world filled with wonder and possibilities for children, one African story at a time.