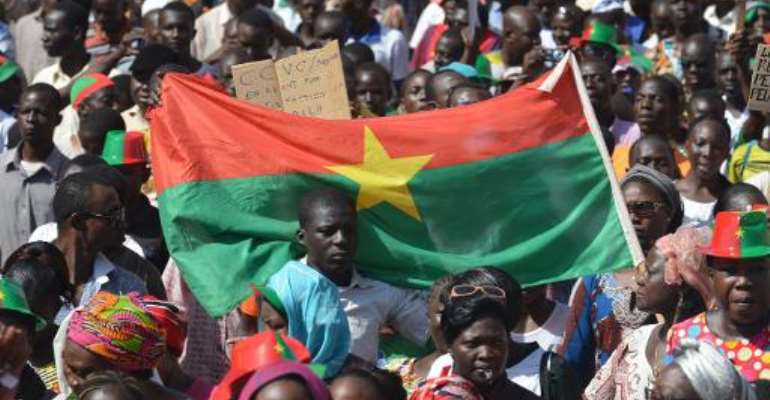 People on October 29, 2014 take part in a march in Ouagadougou. By Issouf Sanogo (AFP)

Banks, shops and markets reopened after street battles erupted during Tuesday's rally by hundreds of thousands of people against what they see as a constitutional coup by supporters of Compaore.

The opposition has called for a blockade of parliament on Thursday when the legislature examines a proposed amendment that would allow Compaore, now in the 27th year of his presidency, to run for reelection for another five years.

"One thing is certain: we'll march on the parliament on Thursday," said Emile Pargui Pare, an official from the Movement of People for Progress (MPP), a young and influential opposition party.

Five people were injured on Tuesday, according to Ablasse Ouedraogo, a former minister now in the opposition.

- Many have had enough -

Compaore's bid to cling to power has angered the opposition and much of the public, including many young people in a country where 60 percent of the population is under 25.

Many have spent their entire lives under the leadership of one man and -- with the poor former French colony stagnating at 183rd out of 186 countries on the UN human development index -- many have had enough.

The situation is being closely watched across Africa where at least four heads of state are preparing or considering similar changes to stay in power, from Burundi to Benin or the Democratic Republic of Congo.

Compaore was only 36 when he seized power in a 1987 coup in which his former friend and one of Africa's most loved leaders, Thomas Sankara, was ousted and assassinated.

The 63-year-old has remained in power since then, re-elected president four times since 1991 -- to two seven-year and two five-year terms.

In 2005, constitutional limits were introduced and Compaore is coming to the end of his second five-year term.

The opposition fears the new rules would enable Compaore to seek re-election not just once, but three more times, paving the way for up to 15 more years in power.

The third largest party in parliament said at the weekend it would back the amendment, setting the ruling party on course to obtain the two-thirds majority it needs to make the change without resorting to a referendum as first promised.

Protesters have erected barricades and burned tyres in the capital since the proposal was announced on October 21.