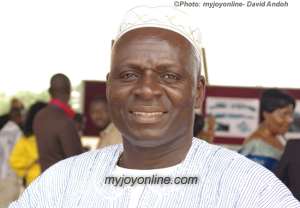 According to him, the actions of some government appointees who are not members of the NDC are unacceptable and take attention away from the work being done by the Mahama-led administration for Ghanaians.

“If people who do not know how the NDC was formed are playing key roles in government; this is what happens,” he bemoaned.

Kuntu Blankson made the comment on Peace FM's morning show, Kokrokoo Wednesday while discussing the ongoing strike by public sector workers over government's involvement in the management of their second tier pension funds.

A meeting between representatives of the striking workers and the Employment minister, Haruna Iddrisu on Tuesday was adjourned after both parties were unable to find a solution to the issues.

But Kuntu Blankson believes some “evil children” in government are inciting the workers against the government.

The former Mfantseman East Member of Parliament, urged the ministers in charge not to treat the issue with kid gloves since according to him, it has the potential to make the NDC unpopular ahead of the 2016 general elections.