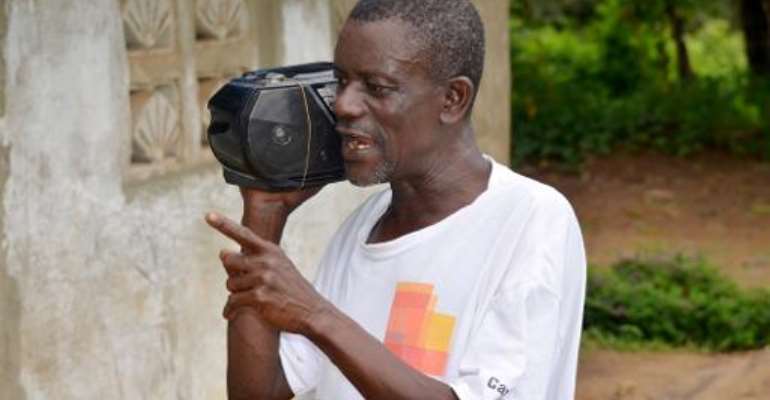 Straining to hear the radio held to his ear, Wesley Wudea gestures for his grandchildren to be silent as he picks up rare tips on Ebola prevention in his own language. By Zoom Dosso (AFP)

Buchanan (Liberia) (AFP) - Straining to hear the radio held to his ear, Wesley Wudea gestures for his grandchildren to be silent as he picks up rare tips on Ebola prevention in his own language.

In Liberia, at the centre of the west African outbreak, the airwaves are often the best way to disseminate information on the epidemic, yet swathes of the ethnically diverse country do not speak the lingua franca.

"They don't mainly understand the words (radio stations) used in English. Some people don't even understand a single English word," says the 61-year-old, in his own stumbling attempt at his country's official language.

Wudea is rare among his countrymen, for only an estimated 20 percent of the population of four million understand English, with everyone else communicating in one of around 30 minority languages.

"Without the vernacular program, they would not have understood the preventive measures to be taken to avoid Ebola," says the retired teacher from Saint John, a village near the southern port of Buchanan.

Wudea keeps a radio set nearby and never misses the news programmes in his native Bassa language, broadcast by the local station Radio Gbehzohn.

He says it was Bassa programming that got him into the habit of asking his children and grandchildren to wash their hands frequently as a measure against Ebola infection.

And his fellow villagers are all now aware of preventive measures against the disease and the need to avoid physical contact with the sick or the dead, he says.

The public health message has become so ingrained, he says, that social practices evolved over centuries, such as shaking hands or touching the dead at funerals, have been stopped.

"To shake hands is part of our tradition. We cannot do it today because of Ebola. This is difficult to accept but we have to," Wudea tells AFP.

Radio Gbehzohn has doubled its programming in Bassa, spoken by a few hundred thousand members of the Kru ethnic grouping, since the epidemic began, program director Isaac Siegal told AFP.

Visitors to his office in Buchanan, which is dotted with posters warning of the dangers of Ebola, must wash their hands with chlorinated water under the watchful eye of a security guard before they are allowed in.

"The local language plays a very important role in our programmes because the majority of the populations live in the rural areas," Siegal says.

West Africa is made up of countries where the official language is either French, English or Portuguese.

Yet in Liberia, Sierra Leone and Guinea -- the countries hit hardest by an epidemic that has killed nearly 5,000 -- as in neighbouring countries, the focus on ethnic languages has become a key weapon in fighting the spread of Ebola.

Commercials, phone-in shows and news programmes are broadcast on radio and television in the local tongue, with the airwaves thrown open to religious leaders, tribal elders and trusted opinion formers.

HRW also highlighted the role played by Radio MOA in Kailahun, a town at the epicentre of the outbreak in eastern Sierra Leone.

The station launched a campaign to quash rumours undermining the fight against the virus, reaching tens of thousands of listeners across the border area straddling Sierra Leone, Liberia and Guinea.

Yet the mission to raise awareness of Ebola in remote areas can be a thankless and even deadly task.

In southern Guinea, eight members of an Ebola campaign team, including three local radio journalists, were killed by villagers who denied the epidemic was real and charged that it was a white conspiracy against black people.

The battle of the airwaves is not limited to countries in the Ebola zone.

The main goal is to improve acceptance of such information among people who often distrust what they are told about disease prevention, and to contribute to a change in their behaviour, it said.

The "Radio Against Ebola" campaign is targeting Ivory Coast, Burkina Faso, Togo and Benin -- none of which have had any Ebola cases -- as well as Senegal, which has been declared rid of the virus, and Mali, the latest affected country.