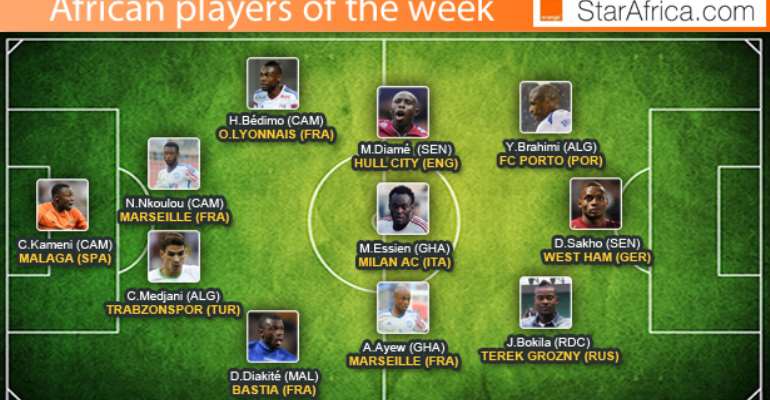 Ghana duo Andre Ayew and Michael Essien has been included in the African Players abroad Team of the Week which has been published by the portal starafrica.com.

Carlos Kameni (Cameroon – Malaga)
The Cameroon goalkeeper continues to be Malaga's number one choice behind the bars despite signing World Cup revelation, Ochoa. He made a couple of good saves and almost no mistakes which helped his team in their 2-1 win over Cordoba.

Drissa Diakite (Mali – Bastia)
The Mali international right back dominated the right side during his teams difficult encounter with Nice. he made some dangerous penetrations and helped a lot in defense as well.

Henri Bedimo (Cameroun – OL)
OL left back had a very successful week after he was part of Cameroon's important 2-0 win over Sierra Leone during in a 2015 Orange AFCON qualifier before he found himself in OL's starting lineup against Montpellier. the speedy left-back was very active as usual and helped his team achieve an impressive 5-1 victory.

Nicolas Nkoulou (Cameroun – OM)
Nkoulou is enjoying a blistering start of the season with OM as their defense leader. The Southern club recorded their 8th win from as many matches and the Cameroon international played a big part in it noit only with his defensive skills and well-timed intervention but also with a beautiful goal with his shoulder!

Carl Medjani (Algeria – Trabzonspor)
Medjani celebrated Algeria's qualification to the 2015 Orange AFCON on Wednesday after an impressive performance and a 3-0 win over Malawi. And to add the cherry to the cake, he was his clubs hero thanks to his goal against Mersin in the Turkish league.

Michael Essien (Ghana – Milan AC)
Despite being ruled-out by Ghana during the 2015 Orange AFCON qualifiers, Essien was praised by AC Milan coach Inzaghi as he replaced Holland midfielder Nigel De Jong in the defensive midfield position.

Andre Ayew (Ghana – OM)
The Black Stars winger is having the best season of his career with OM, he was brilliant on one-on-one situations and helped his team retrieve many balls inside their opponents” half.

Yacine Brahimi (Algeria – FC Porto)
Algeria's World Cup revelation never ceases to amaze with his performance with Porto and his country as well. He only needed one minute to open the score for the Desert Foxes against Malawi!

Diafra Sakho (Senegal – West Ham)
He played a big part in West Ham good start of the season, reaching his 5th goal of the season against Burnley.

Jeremy Bokila (DR Congo – Terek Grozny)
He was DR Congo's hero in their clash with Ivory Coast in Abidjan thanks to a beautiful brace of goals, especially the second goal as he showed impressive skills to get past three defenders and slot the ball into the back of the net.