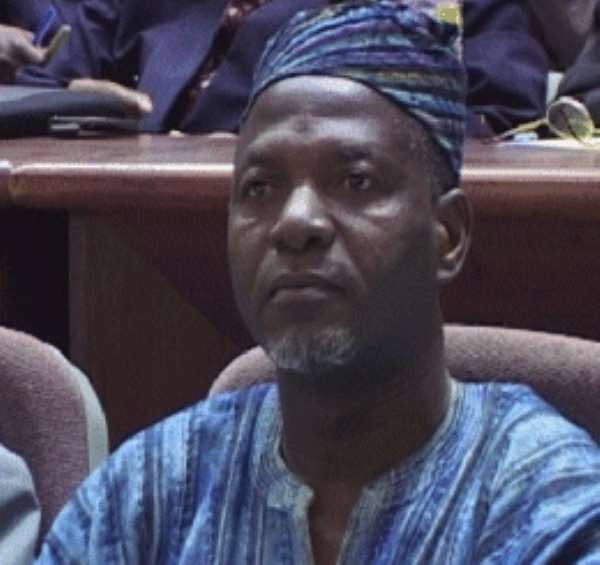 ......Veep Pitches Camp Against MP Contrary to popular belief that the Yendi Constituency would be a fierce battle grounds in December when the NDC attempts to exploit the Dagbon crisis to wrestle the seat from the NPP, it is now emerging that the battle royal would rather be fought during the ruling party's primaries when the incumbent MP would be fighting to save his seat from another candidate perceived to have Vice-President Aliu Mahama's weight behind him.

So intense is the forthcoming contest that an internal feud is said to be brewing within the local NPP. Latent cold war is also reported to have developed between the incumbent MP of Constituency, Alhaji Malik Alhassn Yakubu and the Vice -President, Alhaji Aliu Mahama, The Heritage has learnt from sources close to the two camps.

Checks by this paper reveal that the aspiring MP, Alhaji Idrisu Lukman is claiming that he is being bankrolled by the Vice President to oust the ex-Interior Minister at Yendi. But we also learnt that when the elders and opinion leaders of the party at the constituency sent a delegation to ascertain the veracity or otherwise of Lukman's claims, the Vice-President denied that he was sponsoring him.

Party insider sources, however, insist that the Vice- President's loyalists and foot soldiers at the constituency are working overtime to ensure a resounding victory for Lukman at the primaries.

Reports from the constituency indicate that the supporters of the MP are fighting back to ensure that their man wins the primaries. Sources say the MP's men got the constituency Chairman and Secretary to write a letter to the Regional and National Headquarters asking for the rejection of Mr. Lukman because they believe the ex-Minister would be a better candidate for the Party in the constituency.

The Heritage has gathered that the two regional executives initially refused to give Mr. Lukmen the necessary endorsement to contest against the sitting MP.

Mr. Clifford, the Northern Regional Secretary of the NPP also told this paper in an interview that everybody has his choice and preference.

He said the fact that some one enjoys the support of a party bigwig doesn't mean that he would not go through the normal party procedure. According to him, the primaries would determine who would contest on the party's ticket at the constituency.

Both the Vice-President and the ex-minister come from the same constituency but the Veep is said to be the one who has been pulling the strings at the constituency since 1996. According the constituency sources, Alhaji Aliu had previously been very supportive of the sitting MP over the past couple of years. He backed him in the 2000 elections even though they are perceived to belong to different factions in the NPP.

This paper has learnt that, while the Vice-President belongs to the "Kufuor faction", the ex-Minister is associated with the "Akufo Addo faction".

However, just like other leading members of the Party, the Vice-President and Alhaji Malik put those differences behind them and have been working together for the party at the constituency level since 1996.

Party analysts are not sure about what might have led to the present sour relationship between the two.

As the raging flames of the Dagbon chieftaincy crisis begin to douse, political analysts have been assessing the chances of the various political parties in the Yendi Constituency in view of the apparent rift in the NPP within the area.

In spite of the internal bickering, however, analysts are still convinced that Yendi seat, as a stronghold of the NPP dominated by the Abudus, would be retained by the ruling party.