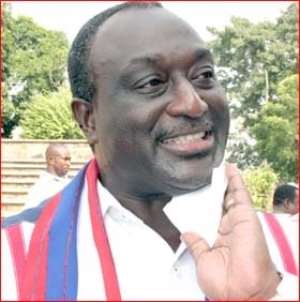 Sunyani, July 10, GNA - Mr Alan Kwadwo Kyerematen, one of the candidates contesting for the New Patriotic Party (NPP) flagbearership, has called on his contenders to promote a clean campaign as the party's delegates' congress draws near.

He emphasized that unity is an essential ingredient if the party is bent on winning the 20016 general elections, and that was why the candidates and their followers ought to conduct themselves in a more responsible manner.

Mr Kyerematen who has contested the party's primaries to lead the NPP in 2008 and 2012 general elections, but lost all to Nana Addo Dankwa Akufo-Addo, was addressing a section of the media at a soiree in Sunyani on Wednesday.

Accompanied by Nana Ohene Ntow, former NPP General-Secretary and other party bigwigs, Mr Kyerematen is on a four-day campaign visit to the Brong-Ahafo Region.

He appealed to his contenders to endeavour to guide their followers and ensure that their campaigns are devoid of inflammatory statements.

The NPP founding member,   emphasized   that the party was built on   strong democratic principles,   and that was why its leadership always opened up to all qualified members to vie for various positions.

Mr Kyerematen advised members and supporters of the NPP not to allow internal elections to create hatred and antagonism within the party, since that will surely affect its fortunes in 2016.

'I have invested much in the party, and I will be the last person to do anything to destabilize it in this crucial moment,' he said.