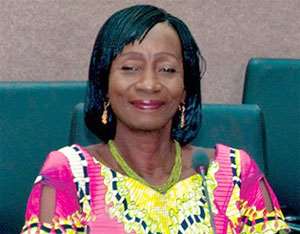 Sherry Ayittey, Minister of Health
Payment of judgement debts is choking the Ministry of Health, the Commission of Enquiry investigating such payments has heard.

The situation forced the ministry to even use donor funds to pay judgement debts after its account was garnisheed through a court order.

Mandate
The 'Commission of Enquiry into the payment of Judgement Debt and Akin' under C.I. 79 to investigate the frivolous and dubious payments of huge monies to undeserving individuals and companies, was appointed by President John Dramani Mahama after public uproar over the payments in what has now come to be termed as Judgement Debts (JD).

Notable among them were payments made to CP (â‚¬94 million) and the never-ending case of GH¢51.2million parted to the self-styled National Democratic Congress (NDC) financier, Alfred Agbesi Woyome, both of which many believed were dubious and frivolous.

Messrs Taylor & Taylor
According to the Ministry's Director of Administration, Hamidu Adakurugu, who also handles legal issues, a company called Messrs Taylor & Taylor signed a contract with the ministry in July 2011 to supply laboratory reagents and maintenance services, which they did.

He said the ministry failed in the payment and that compelled the company to file a suit claiming $878,000 and 7million Euros all being the outstanding balance for the cost of supply and services rendered.

Evidence available to the commission showed that the Attorney General filed a defence but did not pursue the case and in November 2013, the company obtained summary judgement since the ministry had admitted they owed the plaintiff.

Mr. Adakurugu told Sole Commissioner Justice Yaw Apau that when the company refused to accept the ministry's proposal to pay the debt bi-monthly, the plaintiff garnisheed the ministry's account at the Bank of Ghana.

'So GH¢22.2 million donor funds put into our account at the central bank was used to settle the debt,' he testified, adding, 'I guess we are going to have problems with our donor partners because donor funds are tied to specific programmes.'

The commission later heard that some aspects of the case were pending in court and the Sole Commissioner said the commission was declining to investigate further.

Five Companies
He also said that five companies signed a five-year contract with the government in September 2008 to do preventive maintenance works in 52 health training institutions at GH¢1.4million per year but in 2009, the SFO now EOCO stepped in to investigate the deal.

He said after the investigation, the ministry and the companies settled the issue out of court. He said they were in the process of filing the terms of settlement and that the contract stopped in 2009.

Mr. Adakurugu also told the commission that a family from Ada since 2011 had been pursuing the ministry for compensation over a land which was taken by the government in 1965 to build a health post which is now a multipurpose facility.

Unilateral decisions
Justice Apau then expressed concern about the rate at which some of the ministries signed contracts without recourse to the AG.

Mr. Adakurugu admitted that indeed some of the contracts had been signed without the AG's input.

'We, at the legal departments don't even see some of the contracts. In some cases, the contractors bring their own contract and the minister signs.'

He said initially, EOCO wrote to BoG to suspend the payment to one Richard Noel Diaba of Abutia, to enable them to conduct investigations into the claim but the banks wrote back to say the order was belated since the payment had been done.

He said they followed up to the Lands Commission with a letter in June 2010 but the commission said there was nothing irregular in recommending the amount for the claimant and therefore EOCO had to truncate the investigation.

'They are the technical people and we are only investigators so when they told us about it, we suspended the investigation and closed the docket on the case.'

She said they only got to know about the claim when the subpoena was served on them and that the investigative report on the compensations released by the commission was 'quite comprehensive.'