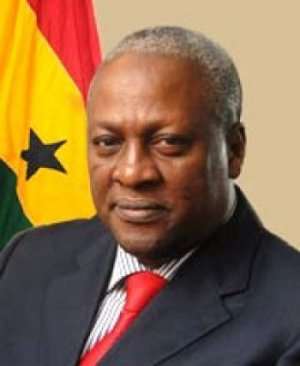 Faith-Based Organisations (FBOs) in Ghana have called on the President of the Republic, John Dramani Mahama, as a matter of urgency, to intervene in halting the passage of the Plant Breeders' Bill (PBB) which is at the consideration stage into law.

Should Parliament ignore their concerns and proceed to pass the current bill into law, the FBOs urged the President to exercise his prerogative of refusing assent to it in the interest of Ghanaians and his personal vision of encouraging home grown solutions.

The day's workshop which took place over the weekend at the National Catholic Secretariat in Accra was organised by the Faith-Based Organizations, in collaboration with Action Aid Ghana, Centre for Indigenous Knowledge and Organizational Development (CIKOD) and Peasant Farmers' Association of Ghana (PFAG) with sponsorship from STAR-Ghana.

The FBOs suggested to the Ghanaian Parliament to suspend the passage of the bill in its present state till there is adequate public information on the pros and cons of the Bill.

If it is going to be passed it must be subjected to vigorous public debate which will include all sections of the Ghanaian society, the Executive Secretary of Department of Human Development at the National Catholic Secretariat, Samuel Zan Akologo further recommended.

We call for the withdrawal of the current Bill to allow for in-depth analysis and to build national consensus. We further call for the redrafting of the Bill to address the concerns of interest groups such as farmers, local seed producers, local researchers and consumers, according to the religious groups.

Representatives of the Ghana Muslim Mission and Ahmadiyya Muslim Mission, Daniyal Quaye, and Abdul Wahab Owusu encouraged Parliament to assume a non-partisan approach in engaging with stakeholders who have concerns on the bill.

For the Secretary of the Ghana Muslim Ladies' Association, a branch of Federation of Muslim Women of Ghana (FONWAG), Madam Hafsatu Salisu: "The bill should not be passed into law at all. We don't need GMOs to survive."

According to the Faith-Based Organisations, their position on the debate has become necessary due to the importance of agriculture in the Ghanaian economy and the negative implication of Plant Breeders' Bill and GMOs to the Ghanaian food sovereignty.

As key stakeholders in the democratic processes in Ghana with a large following that cut across ethnic, social and political divides across the country, they resolved and agreed on the following for consideration by Parliament:

FBOs' CONCERNS
Many Ghanaians are not aware of or understand what is contained in the Plant Breeders' Bill. There has not been adequate public education and consensus on the bill. The FBOs said in their position paper: "We are alarmed by attempts by Parliament to pass the Bill without adequate consultation with key stakeholders including the Faith-Based Organizations. Citizens of the diverse faiths constitute over 90% of the Ghanaian population.

We are interested in issues of agriculture and this is manifested through the several investments the FBOs have made in agricultural projects across the country. Our practical experience in working in the agricultural sector indicate that Ghana's dwindling food production cannot be attributed to our non-usage of GMO technologies but due to poor access roads to farms, lack of credit, unavailability of ready market, lack of storage facilities and agricultural processing".

They therefore suggested to Government and Parliament to redirect efforts and resources in these areas rather than falling for cheap and quick fix solutions that have the potential of compromising the future of our constituents and the danger of Ghana losing her right to food sovereignty to multi-national companies.

The speed at which Government and Parliament are running with the Plant Breeders' Bill which will lead to the legitimization of GMOs leaves much to be desired, the religious groups noted.

BILL FAVOURS SEED BREEDERS
Proponents of the bill especially farmers and civil society organizations (CSOs) in Ghana warned that if the current bill is passed by Parliament, multinational seed and chemical companies would takeover the country's burgeoning seed market from Ghanaians.

They explained that the bill in its current state gives the multinational companies and in some cases their scientists the leeway to bring their seeds into the country without the authorisation of the Republic.

The Head of Legal Affairs at Food Sovereignty Ghana (FSG), John Yaw Opoku quoted Section 23 of the Plant Breeders Bill which states: 'A plant breeder right shall be independent of any measure taken by the Republic to regulate within Ghana the production, certification, and marketing of material of a variety or the importation or exportation of the material' to support the argument.

He told the Faith-Based Organisations that 'the bill as it is, the government has no authority over any seed production and marketing firm' which deals in seeds in the country.

The seed bill is like putting your stomach in someone's kitchen. It is not about the food, but it is about who controls the food, Mr Opoku stated.

Another absurdity of the bill is that, it is demanding royalties from farmers when they use seeds breed from scientists.

According to the proponents of the bill, when it is passed, it will penalise farmers from borrowing seeds from their colleagues.

It will be shameful if our Parliament will pass the current bill into law, the FBOs, CSOs, and the farmers yelled at the Osu-based legislators. They therefore called on the Members of Parliament (MPs) to unanimously reject the bill during its consideration.

HEALTH AND ECONOMIC RISKS OF GMOS
According to him, the American Academy of Environmental Medicine (AAEM) had urged physicians to advise all patients to avoid genetically modified food.

The Executive Director of CIKOD, Bernard Guri added that; 'GM seeds does not lead to yield increase but high response; does not reduce pesticide use (increases pesticide use eventually), and does not enhance nutritional value of food.

GM will make dependent on foreign corporations for seeds. Small farmers will lose the right to freely use, select, share and sell seeds, the CIKOD boss stressed.

Mr Guri added: "Acceptance of GMOs will increase the cost of seeds and herbicides leading to indebtedness of small scale farmers" as it is common in India.

GMOs will lead to industrialisation of agriculture in which many small holder farmers will lose their lands to multinational firms. In this regard, these farmers will become jobless, he told the religious groups.

Attempts to delink the Plant Breeders' Bill from the current global discussions on genetically modified organisms (GMOs) are also on the crescendo, while a lot of campaigns by politicians, scientists and CSOs on the benefits of GMOs and the PBB are at peak.

However, the Food and Agricultural Organisation (FAO) in its latest report said the increased production of genetically modified crops around the globe has led to a higher number of incidents of low levels of GMOs being detected in traded food and feed.

The incidents have led to trade disruptions between countries with shipments of grain, cereal and other crops being blocked by importing countries and destroyed or returned to the country of origin.

The trace amounts of GM crops become mixed with non-GM food and feed crops by accident during field production (for example, a field trial of a GM crop grown near a field of a non-GM crop), processing, packing, storage and transportation.

There is no international agreement defining or quantifying 'low level', therefore, the interpretation varies from country to country. In many countries it is interpreted as any level at which detection is a possible i.e. very low trace level while in other countries case-by-case decisions are taken on what level is acceptable.

The GM crop in question may be authorized for commercial use or sale in one or more countries but not yet authorized in an importing country. Therefore, if the importing country detects the unauthorised crop, it may be legally obliged to reject the shipment.