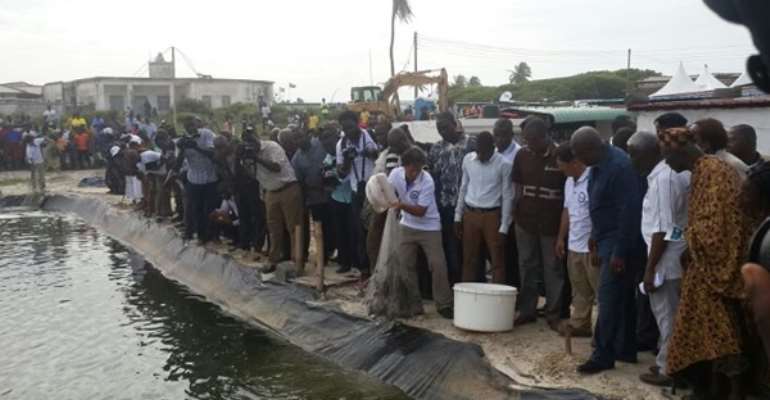 According to the president, the scheme should  create over 2000 jobs. It is also expected to add an estimated $2 billion  per annum to the national economy if exploited for exports.

The president noted the scheme will be integrated into the National Service scheme and would target university graduates with requisite knowledge.

He also urged the youth in the area to take advantage of the project and the opportunities it presents.

The project, he added could create 50,000 jobs along the value chain. The president called for a rigorous monitoring systems to strictly maintain the hygienic conditions which would guarantee premium prices at the international level.

He said Ghana is ready and willing to invest in the venture.

The new hatchery currently has over 200,000 larvae of tiger shrimps species and has grown over 100,000 of shrimps.

Director and Scientist in charge of the hatchery, AK Armah said the facility also has the ability to produce 15 million larvae on monthly basis. He said the challenges recorded in mainstream fishing makes promotion of the Tiger shrimp fishing concept even more imperative asking government to take up the challenge.

The project is a collaborative effort between Ghana and Vietnam.

The Vietnamese Ambassador Ho Ngoc Hoang was of the view Ghana provides a more favourable climatic conditions for the Tiger Shrimp species than Vietnam which has still managed to make shrimp exports one of its economic backbones.