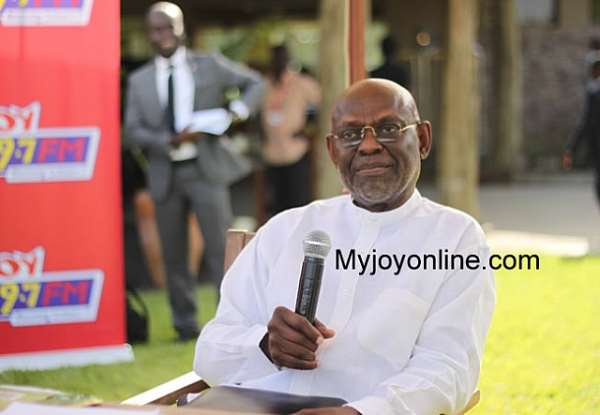 He is the third speaker in the series. Dr Mahamud Bawumia was the second speaker.

Under the theme  “State of the Nation's Political Economy and the Role of Civil Society” Prof Botchwey would attempt to dissect Ghana's economy through the lenses of politics.

In his tenure as Minister, Botchwey championed many IMF interventions and tried to put the country's economy on track.

Having left the country for a number of years, Prof Botchwey returned and played a crucial role in the just ended National Economic Forum which ended with what has now been christened the "Senchi Consensus."

After a long introduction by Prof Kwesi Yankah, the distinguished speaker mounts the podium to begin his lecture.

Prof Botchwey applauds his earlier speaker Dr Mahamud Bawumia,  "whose credentials i respect. I offer no rebuttals [to his lecture]. I do agree with much of what he said."

Critical Issues facing the economy.
ANECDOTES
I see a nation reeling widespread disaffection; a bit of despair, a popular mood marked by frustration, arising cynisism about any explannation, assuarnces by government and technocrats.

A feeling that everybody in public office is engaged in corruption and money grabbing.

There is a spill over on the roads as citizens jump red lights and drive on multiple lanes and condemn law abiding motorists to long hours of stay in traffic.

It is also seen in the desperate faces of destitute who scratch cars ir rain insults if one fails to offer help.

He says one one cannot appraise the nation's political economy on the basis of anecdotes. We must study and analyse the true state of things.

SENCHI CONSENSUS
Key observation at Senchi was to underscore policy credibility for the restoration of macro economic stability.

There has been erosion of the country's credibility in the eyes of the international market and even within the country.

We have missed macro-economic targets on two consecutive occasions not even by smaller margins.

The panic driven changes in measures announced by the Bank of Ghana have not worked because the very structure of government expenditure has imposed a certain rigidity on the national budget.

In last year's budget alone; wages and public debt accounted for about 82 per cent of government per cent.

It leaves a paltry 18 per cent for everything else. This challenge has not been understood or highlighted in public discourse.

The situation in 2014 could become worse because the projected revenue is 24 billion cedis; statutory spending and other expenditures accounts for 102 per cent of total revenue leaving a negative 200 million cedis for expenditure on infrastructure.

If the policies of full cost recovery will not be pursued then a provision would have to be made for the payment of arrears for the operations of the utility services.

If the evidence of history is anything to go by and the constraints on the economy, transfers from the budget for the payment of utilities will not work.

The country for many years has lived beyond its means.