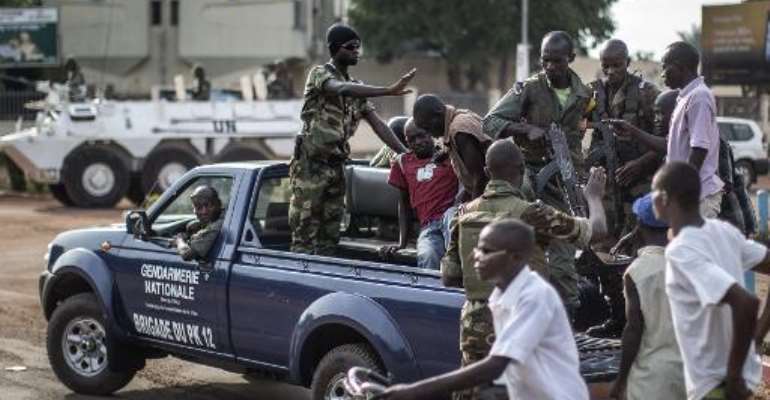 Police help to carry a wounded civilian off his bike onto a truck heading to the hospital in Bangui on May 29, 2014. By Marco Longari (AFP/File)

The victims were thought to have been killed after peacekeepers opened fire on thousands of anti-government protesters.

Burundian troops forming part of the African Union's MISCA peacekeeping force fired on "armed demonstrators" they said were trying to "force their way into their base", Colonel Bengone Otsaga, head of MISCA's police force, told AFP.

Two were shot dead and several others injured, some seriously, in the clashes near the centre of the capital Bangui, the Red Cross said.

The third fatality was brought to a hospital operated by aid group Doctors Without Borders, along with five people who were injured in the violence.

Thousands of people had gathered across the city on Friday calling for the removal of the interim government and accusing international forces of failing to prevent Wednesday's church attack.

The United Nations has increased the death toll from the assault on the Notre Dame de Fatima church, where some 9,000 displaced people had taken shelter, to 17.

Fatoumata Lejeune-Kaba, spokeswoman for the UN's refugee agency in Geneva, said the attack "resulted in the deaths of at least 17 displaced people and 27 civilians reportedly abducted by assailants who drove them to an unknown location."

"We have no idea where they have taken them," she said.

Among those killed was the priest at the church, according to police sources and the charity.

"The attackers, who arrived on pick-up trucks in the early afternoon, threw grenades into the church ground before opening fire on people, using small arms. A priest was killed during the attack while two children and two adults succumbed to their injuries on Thursday," said Lejeune-Kaba.

"The church is now completely empty. Many fled without anything, no money, no food, not even a mat to sleep on. Others had bullet wounds that need to be attended to urgently," she said.

Members of the mostly Muslim Seleka rebels have been blamed for the attack on the church, but Lejeune-Kaba said the authorities "really don't know" if they were involved.

She said such incidents were recurring because "those who repeatedly carry out crimes continue to circulate freely" and called on the international community to rapidly support the process of reforming the Central African army, currently disarmed and held to barracks.

"We need the use of all our defence and security forces, including the Central African armed forces. The discussions are well advanced with the international community that is starting to understand our concerns on the subject," she said.

She also called on the protesters in Bangui to pull down barricades they had erected around the city.

"You can't manage a country in the midst of disorder. I don't want the blood of the people of Central Africa to keep flowing," she said.

On Friday, bursts of automatic weapons fire were heard in the central Bangui neighbourhood that is home to the presidential palace, and in the area of the airport on the outskirts of the city.

Violence in the capital has increased drastically since last weekend, according to the UN spokeswoman.

The French and African peacekeeping force said on Friday that it would "react with the greatest determination" to any threats against its soldiers or locals in Bangui.

A joint statement from the forces, released via Central African radio, said: "People of Bangui, do not oppose the movement of international forces. Do not build barricades, do not prevent its operations."

On Friday, the International Committee of the Red Cross said it was "very worried" by the situation in the capital, where the aid organisation has teams trying to help the wounded.

"We must be allowed to evacuate sick and wounded people, and collect the bodies of the dead, in complete safety and without hindrance," Jurg Eglin, the head of the delegation in the country, said.

The deeply impoverished, majority Christian country has been wracked by relentless tit-for-tat attacks between Christian vigilante groups and the mainly Muslim ex-Seleka rebels who seized control in a coup last year but were forced from power in January.

There are 425,000 internally displaced people across the country, and a further 121,000 refugees in neighbouring countries.