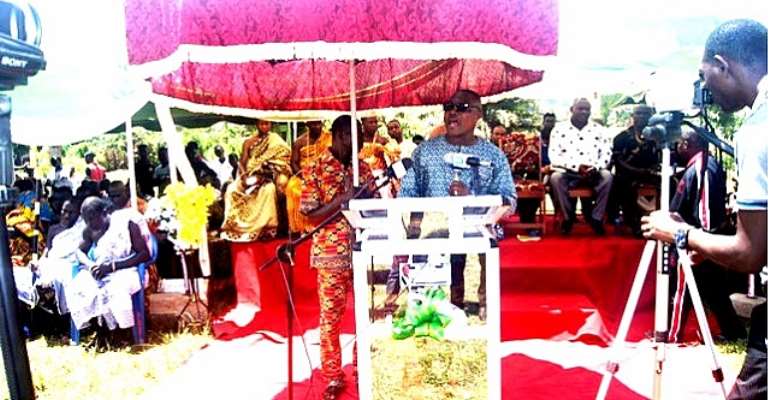 Gold Fields Ghana has taken yet another giant step in its effort to bring sustainable socio economic development to its host communities.

The Damang Mine of the company has handed over a newly constructed clinic and nurses' quarters at the cost of US$244,000.00 to the Ghana Health Service and the Bompieso Community in the Prestea Huni-Valley district of the Western Region.

The construction of the facility follows a request made on the management of the Damang mine in 2011.

The only clinic serving the community at the time was a-two- room derelict structure that also doubled as living quarters for two community health nurses. Gold Fields was requested to replace this structure with a modern well equipped one comparable to any health facility in the big cities of Ghana.

The new Bompieso community clinic can boast of a pharmacy, 6 beds male ward, 6 beds female ward and a medical laboratory. Other facilities include a spacious out patients' hall, two consulting rooms and a delivery room.

In order to attract and maintain highly qualified professionals in the community, Gold Fields also provided a – 4 – bedroom semi-detached living quarters as part of the project. Both facilities are served by a mechanized borehole and overhead tank attached to the facility.

Despite the cash flow challenges facing all gold producers the world over, Gold Fields, through its foundation voted funds for the project to start in 2012.

At a well-attended ceremony to hand the facilities over to the community, Mr. Alfred Baku, the executive vice president and head of West Africa, Gold Fields, noted that the company is committed to impacting the lives of the people living in the catchment area of its operations.

Gold Fields Ghana will not relent in rendering support to the people despite the challenging times in the gold mining industry, he said.

From 2002 to 2013, the company through the Gold Fields Ghana Foundation has injected a sum of around $26 million into several developmental projects in areas such as education, water and sanitation, skills and infrastructure development, sports, health among others, according to Baku.

He believes that the Bompieso clinic and the staff accommodation will be of immense benefit to the people and as well contribute to the attainment the Millennium Development Goals 4 & 5.

Baku stressed that, Gold Fields “is not just interested in the quantum of money invested in its host communities. The company takes more joy from the impact of these investments in the lives of individual community members as well as the entire community.”

Mr. Baku expressed the company's appreciation to Nana Atta Brempong II, chief of Bompieso for donating the parcel land for the project. The EVP prompted the chiefs and people of the community to ensure that the facility is well maintained.

Honorable Francis Adu-Blay Koffie, the Member of Parliament for Prestea-Huni Valley, in his speech lauded Mr. Alfred Baku for being reliable and instrumental in improving the mining sector as well as the lives of the people residing in the catchment areas.

He also praised the mining giant for its unparalleled contributions towards the development of the catchment communities.

Honorable Adu-Blay Koffie urged the youth to desist from divisive partisan politics and rather come together to embark on developmental projects for their communities.

Hon Wisdom Cudjoe, the District Chief Executive of the Prestea Huni Valley District Assembly also called for unity among the various interest groups in the community. He was full of praise for Gold Fields – Damang and described the company as a strategic partner in the development of the community.

The event, which also marked the second anniversary celebration of the enstoolment of Nana Atta Brempong as Bompieso chief, drew audience from Gold Fields Ghana Limited, the Prestea-Huni Valley District Assembly, the traditional leaders of the area, the District Health Directorate, the clergy, Muslim community among others.

Mr. Abdel-Razak Yakubu, Community Affairs and Public Relations Manager of Gold Fields – Damang, in an interview, thanked the chiefs and people of the 9 host communities for the productive relationship that they have nurtured between the communities and the company.

Mr. Marcus Brewster, the General Manager of Gold Fields Damang, on behalf of the Foundation, presented a brand new desktop computer, printer, scanner and other accessories to the officers of the Damang community clinic which was also funded by Gold Fields Damang in 2012.

The gold producer, which is currently the highest tax payer in Ghana, has in recent past, been involved in the sponsorship of the senior national football team the Black Stars.

Gold Fields is currently the headline sponsor of Medeama Sporting Club based in Tarkwa. 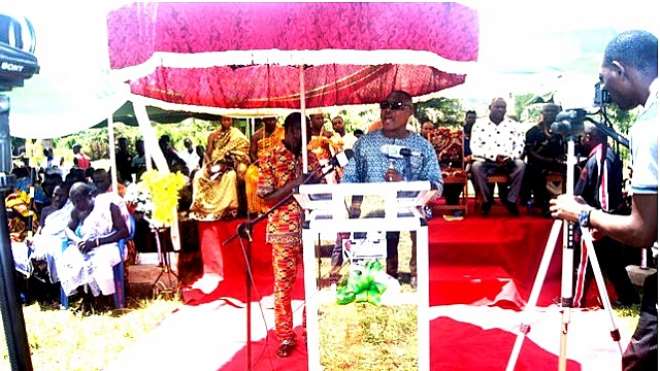