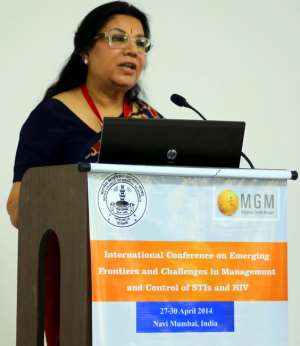 Sexually transmitted infections (STIs), including HIV, are known to be primarily transmitted through sexual route which has created a major impact on sexual and reproductive health worldwide. Although some of the STIs are curable but others still do not have any effective preventive or therapeutics available such as human immunodeficiency virus (HIV), human papillomavirus (HPV), herpes simplex virus (HSV) and hepatitis B virus (HBV). Globally, STIs and their complications rank in the top five disease categories for which adults and adolescent seek health care.

The ongoing International Conference on “Emerging Frontiers and Challenges in Management and Control of STIs and HIV” organized by National Institute for Research in Reproductive Health (Indian Council of Medical Research) and MGM Institute of Health Sciences and being held in Mumbai, India focuses on issues like transmission, disease progression, resistance to therapeutics, development of effective strategies for diagnosis, prevention, treatment and control and stigma associated with STIs including HIV. It provides an interactive forum to researchers, public health providers and policy makers for addressing issues related to mode, mechanism and management of STIs.

One such multi- pronged management strategy for STIs is multi prevention technology (MPT). MPTs are new tools under development that are designed to address at least two sexual and reproductive health (SRH) needs, including prevention of unintended pregnancies, STIs including HIV, and other reproductive tract infections (RTIs). If used, MPTs would save lives and money and transform the health of women across the world.

In one of the conference sessions, Dr Nomita Chandhiok, a senior reproductive health scientist and Deputy Director General of Indian Council of Medical Research (ICMR), Government of India, rightly pointed out that women have varying SRH needs over time—if they are sexually active they would like to plan and space pregnancy and also aim for protection against STI/ RTI/ HIV. In addition to this they may also need a long term or permanent method of contraception.

Dr Chandhiok lamented that whereas the Millennium Development Goal is to have a maximum maternal mortality rate (MMR) of 109 per one lakh births by 2015, the current figure for India is 178. Also 25% of all pregnancies are unwanted with nearly 4 million induced abortions every year. Also in states where MMR is high, contraceptive prevalence rate is very low. For example in Uttar Pradesh, where MMR is as high as 359, any form of family planning method used is 43.6%.

The state also has a very high rate of STIs at 6.6%. Along with a high unmet need for contraception, the country does not have good surveillance data for STI/RTI prevalence in the general population. Whatever data is available is mostly clinic based data from different studies where same methodologies are not used.

Greater choices would empower women to have more control over their health. Preventing unintended pregnancies can save maternal lives. Existing MPTs are the male and female condoms which provide protection against unintended pregnancies as well as HIV and STIs. According to Dr Yogesh Marfatia, of Vadodara Medical College, while the protective value of male condom is not very high for preventing STIs, the female controlled preventive methods are less publicised in India.

Unfortunately, although approved by US FDA in 1993, the female condom is still not available under the Indian government programme, is commercially too expensive, has a strong provider bias from the outset, and there is almost non- existent user education and limited data on their acceptability in general population.

Dr Chandhiok informed Citizen News Service (CNS) that innovative MPTs in the pipeline include drug device combinations, multipurpose vaccines and gels, long acting injectables, sustained release devices like combination intra vaginal rings, and 'one size fits most' silicone diaphragms that may provide simultaneous protection against unintended pregnancies and STIs. New microbicide gels can protect against HIV and STIs. Also as women's perceived risk of HIV/STI is low as compared to their perceived risk of pregnancy and given the existing stigma around getting HIV/STI services, combined technologies may be widely used and thus help promote increased integration in healthcare delivery.

Of course for wider acceptance MPTs will have to be free of undue side effects, should be user friendly and affordable, allowing women increased control and independence over their sexual and reproductive health. Status of women in society and within families is critical for promoting changes in reproductive attitudes and behaviour.

According to Dr Chandhiok, MPT research priorities for India are product development of drugs and devices; clinical trials for safety and efficacy; acceptability of female controlled devices like female condom, diaphragm, cervical cap, vaginal ring; providers and users' perspective and innovative communication strategies to improve utilization. She believes that while socio cultural beliefs, gender dynamics, users and providers' perspective and positioning of product would impact product acceptability, MPTs have a great potential for public health impact. So keeping in mind the public health importance of MPTs, we need to involve all stakeholders to support research on development of effective MPTs and at the same time increase the utilization and access of existing products.

U/E: 'Stop wearing one attire at home, to market, chase wome...
7 minutes ago