Ho Poly to get residential units 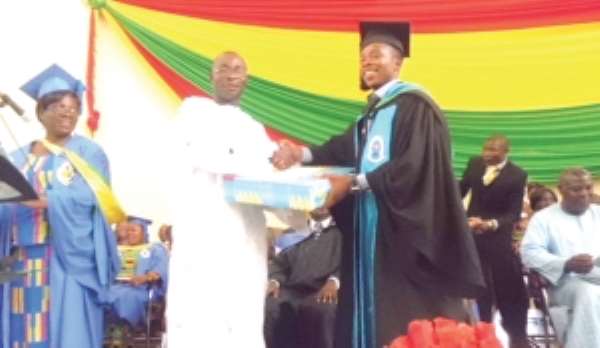 The Ho Polytechnic has reached an agreement with a multinational company, SAAZO Ghana Limited, for the construction of residential units to provide staff and students of the polytechnic with additional accommodation.

Under the agreement, SAAZO Ghana Limited will construct a 2,000-capacity hostel to include sports and recreational facilities, two five-storey buildings made up of 20 flats, as well as three-bedroom self-contained residential blocks for staff members.

The agreement further stipulated that the company would operate on a build, operate and transfer (BOT) basis.

The polytechnic has also set aside funds from its internally generated funds for the construction of a five-storey classroom block for the Faculty of Engineering, and it is expected to take off soon.

Hitherto, there were only two halls of residence for the over 5,000 students, compelling many students to live in rented houses and bungalows, some of them with poor facilities and unhygienic conditions.

The Rector of the polytechnic, Dr Jakpasu Victor Kofi Afun, announced this at the 14th congregation of 1,120 graduands, during which 30 of them were awarded Bachelor's degrees in Technology (B-Tech), Agricultural Engineering, Automobile Engineering or Hospitality and Tourism Management, while the rest were awarded Higher National Diplomas (HNDs).

Special window admissions
He said the polytechnic admitted only 1,700 new students last year even though the admission requirements were reduced to favour candidates with D7 and E8 in the core subjects and the polytechnic expected the number to be higher in view of the two batches of students that completed senior high school last year.

Disciplinary action
He disclosed that two second-year students were dismissed for using fake certificates to gain admission, adding that 23 others were rusticated for examination malpractices during the second semester examinations of the 2012/2013 academic year.

Technical universities
In an address read on his behalf, the Minister of Finance and Economic Planning, Mr Seth Terkper, announced that the Ministerial Committee on the Conversion of Polytechnics to Technical Universities had submitted a draft interim report to the ministry of education, with the promise that the government would do everything to ensure that the proposed technical university system was started as scheduled.

Skills-based training
He said the government had allocated GH¢4million through the GETFund for the building of laboratories for electronics, pumping systems, advanced manufacturing and solar and wind technology at the Ho and Koforidua polytechnics as part of its skills-based technical systems in the polytechnics.

Mr Terkper expressed the hope that the competency-based training (CBT), which has become the hallmark of polytechnic training in the country, would bridge the gap between educational training and the world of work.

In a welcome address, the Chairman of the governing council of the polytechnic, Professor Anthony Apeke Adimado, said the council had reached an agreement with a consultant to provide the polytechnic with an on-campus service that would ensure total connectivity on the whole campus with regards to information and communication technology.