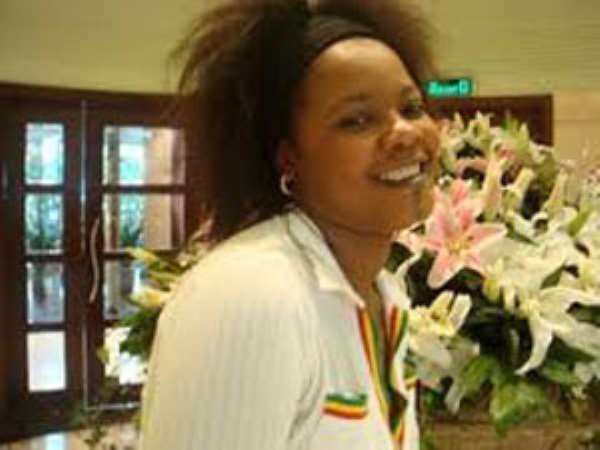 Aisha Gangarey
The dockets of the six persons, including Aisha Gangarey, a TV presenter, who have been arraigned for allegedly importing 3.7 kilograms of heroin into the United States of America (USA) through couriers, have been sent to the Attorney-General's  office for advice.

This was disclosed by the prosecuting officer, DSP Aidan Dery, before an Accra Circuit Court presided over by Mr. Francis Obiri yesterday when the cases were called.

He told the court that the dockets of the suspects  - Gangarey; Benjamin Boamah, alias Kweku; Derrick Boateng; Lawrence Aboagye and another group, involving Alvin Salim Mustapha and Derrick Maxwell – had been forwarded to the A-G's office.

The prosecutor said a State Attorney, Rebecca Adjalo, had been assigned the case docket, but had called to say she was indisposed.

The DSP therefore prayed the court to adjourn the hearing to enable the Attorney to appear in court to prosecute the case.

Paul Assibi Abariga, counsel for the suspects, told the court that if by the next hearing the State Attorney failed to appear, the suspects should be set free or granted bail till the time the State would be ready to resume the trial.

The suspects had couriers who were apprehended by the Federal Bureau of Investigations (FBI) and US authorities.

The said couriers, who had become collaborative witnesses (CW) in the US, were arrested at JFK Airport and Washington International Airport in the States and mentioned the suspects as those who sent them. The six could be extradited to the United States if found guilty.

DSP Aidan Dery, who presented the facts on the TV presenter, stated that she is a Ghanaian and a TV presenter who resides at Kokomlemle in Accra, adding that her husband (now deceased) was allegedly into drugs and had a partner who was arrested in the United States in 2012.

He said the FBI, in collaboration with Interpol Accra, the Narcotics Control Board (NACOB) and the United States Embassy, received a deposition on August 28, 2013 through the Attorney-General for the extradition of Aisha after her deceased husband's partner, who was arrested in the United States over heroin, became a CW.

According to him, the suspect mentioned Aisha as the one who sent her 1.5 kg of heroin through a courier at the cost $35,000.

According to him, the suspect in the US had her picture which he showed the FBI and the US authorities.

The police officer stated that on December 10, 2013, the A-G received a deposition from the US Embassy and FBI concerning an extradition request for Boamah, Boateng and Aboagye, who are also Ghanaians residing in Accra.

The prosecutor said the deposition stated that on April 19, 2012, a drug suspect, was arrested at Washington International Airport by US Customs and Boarder Protection Inspectors after he had expelled 767 gm of pellets which tested positive for heroin.

He said the suspect, during interrogation, mentioned the Ghanaian suspects as those who helped him to obtain the said drugs after he had told them he wanted some to buy for importation into the US.

He said while the other suspects gave him money to buy some of the heroin, it was Femi who gave $25,000 to buy most of it.

The prosecutor said Mustapha and Maxwell are also Ghanaians and residents of Newtown and that a deposition from the US regarding an extradition request was received by the (AG) on December 12, 2013.

Explaining further, he said the request followed the arrest of a suspect at JFK Airport after he had arrived from Ghana with Delta Airlines and was arrested with 1.4 kg of heroin.

The case has been adjourned to April 2, 2014.
By Fidelia Achama