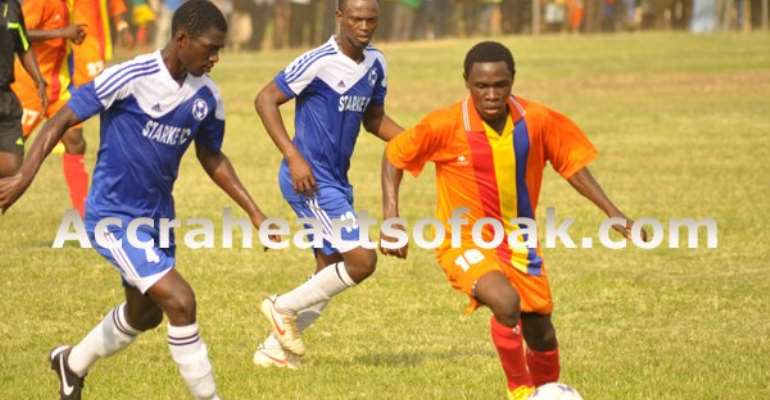 By Akyereko Frimpong Manson
Hearts of Oak's U21 side shared the spoils with Liberty Professionals U21 in a 2-2 drawn tie in the Ghanaian Reserves League on Monday afternoon at the Polo Park.

Hearts paraded U20 invitee Ishmael Nortey in their line-up while first team new signing Abdul Manan was also in the Hearts team.

But it was Liberty who took lead after Hearts wasted a flurry of chances with Maxwell Boakye wasting the brightest opportunity of the afternoon.

Gabriel Asante scrolled down the area to drill a powerful shot to the far corner leaving Richard Kissi helpless in goal.

The Young Phobians were denied on a number times by the Liberty keeper after a sustained pressure before the end of the first department.

However, five minutes after the break, Ishmael Nortey pulled even for Hearts. The attacker frontally darted a fierce drive to the top corner after a Gabriel Darko early effort was blocked.

But the game could not remain in stalemate for long as Liberty restored their lead with substitute Ibrahim Bawa scoring on the 65th minute mark.

Then Hearts equalised from the spot through Fatau Mohammed after Razak Bukari had been felled inside the box.