Behaviour change, a must for improved sanitation - Minister 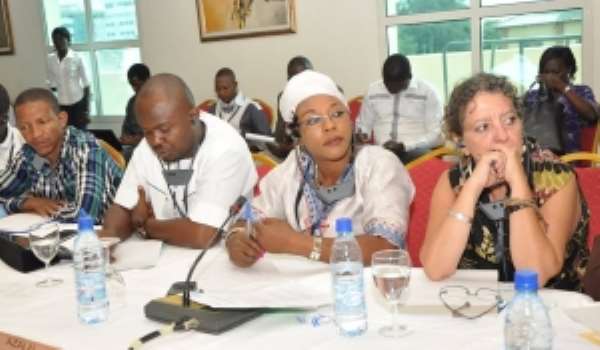 Benin's Minister of Health, Professor Dorothéme Kinde Gazard, has called on African nations to lay emphasis on behaviour change communication, as it is the surest way to achieve improved sanitation.

Disclosing that 87 per cent of Africans were still engaged in open defecation, while only three out of 10 people washed their hands with soap, she stated, “So the challenge is also on behaviour change.”

The Health Minister therefore urged African countries to strike a balance between change in behaviour and the provision of sanitation facilities.

Governments' Commitments to WASH
Professor Dorothéme Gazard made the statements when she addressed the opening of a three-day regional workshop on “Advocacy, Communications and Monitoring of [water, sanitation and hygiene] WASH Commitments” for selected journalists, in Cotonou on Tuesday.

The workshop, which is being organised by the Water Supply and Sanitation Collaborative Council (WSSCC), WaterAid West Africa (WAWA) and the West Africa Water and Sanitation Journalists Network (WASH-JN), in collaboration with Benin's Ministry of Health, has attracted over 30 participants from West and Southern Africa.

The aim of the workshop is to alert the media on their responsibility to hold their governments accountable on the commitments made towards the improvement of water, sanitation and hygiene services, especially in international conventions and at national, regional and international fora.

Use of Local Languages
Professor Gazard advocated the use of local languages by non-governmental organisations (NGOs), civil society and the media, for behaviour change communication, saying; “It is only through this, that we can achieve change in behaviour.”

She said although African nations faced immense challenges in the provision of water, sanitation and hygiene services, countries had not given them much attention, adding that because the issues had gained international recognition, they would be an essential component of the post 2015 millennium development goals (MDGs) evaluation.

Urging participants to support their government's commitment towards the provision of potable water and improved sanitation, she said 'No other issue suffers such disparity between its human importance and its political priority,' quoting former United Nations Secretary General, Kofi Annan.

Symbolic Meeting
The Head of Advocacy and Communications, WSSCC, Ms Amanda Marlin, said the meeting was symbolic, because a similar meeting would be held in New York, USA, all aimed at preventing sanitation related diseases, infant mortality and poverty reduction by 2015.

She said it was time everyone everywhere respected sanitation, to improve the living conditions of the population, adding that change of behaviour would also improve health and population income.

President of the Union of Media Professionals, Benin (UPMB), Mr Franck Kpotcheme, said access to water and sanitation was still a concern to many and urged the media to investigate WASH issues to bring them to the attention of authorities.

He said the Cotonou workshop was an appeal to West African journalists to focus on water, sanitation and hygiene issues and to media establishments to assist journalists who chose to focus on those issues to save human lives.

The UPMB President asked the media to play its watchdog role to make governments fulfil their promises regarding their WASH sector commitments.

Coordinator of the WASH-JN, Mr Alain Tossounon, said the objective of the workshop, was to improve media coverage on WASH issues, in terms of quantity and quality, and that it was only through communication, that journalists could publicise the challenges and solutions to the issues.