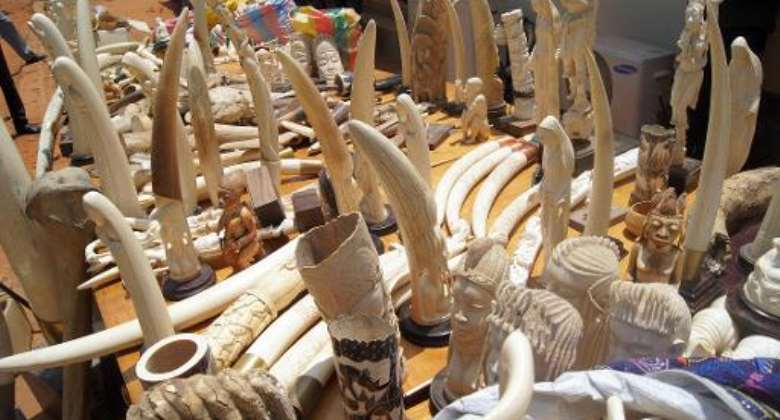 Lome (AFP) - Togo is intensifying its efforts to crack down on ivory trafficking after a number of large seizures, warning smugglers that the country will no longer be a staging post for the illegal trade.

In the past week alone, nearly four tonnes of ivory have been discovered at the tiny west African nation's main port in the capital, Lome, following other large seizures last year.

The discoveries came after African and Asian nations pledged last month to introduce urgent measures to tackle the illegal ivory trade, from slaughter of elephants to trafficking of tusks.

The meeting in Botswana in December agreed to implement a "zero tolerance" approach to wildlife crime and international cooperation to shut down criminal gangs involved in the practice.

On January 23, nearly 1.7 tonnes of ivory was found in a shipping container bound for Vietnam from Lome, while on Thursday, a further 2.1 tonnes were discovered during a search of the same shipment.

Three people have been arrested, two of them Togolese nationals and the third a Vietnamese man.

"Togo has today become one of the transit countries for these shameless traffickers."

Elephants, the world's largest land mammal, are one of Africa's biggest tourist attractions and are found across the continent.

Trade in ivory was banned in 1989 under the Convention on International Trade in Endangered Species of Wild Fauna and Flora (CITES).

CITES and other animal protection groups have warned that as many as 20 percent of the continent's elephants could disappear within a decade if current poaching rates are not tackled.

An estimated 22,000 elephants were killed illegally in Africa in 2012, the groups said.

Demand for tusks, particularly in Asia for decorative purposes and use in traditional medicines, has fuelled a lucrative illicit trade thought to be worth up to $10 billion a year.

The proceeds are said to often fund militia and rebel groups.

The head of Togolese environmental and animal protection group Horizon Vert, Paul Dogboe, said they were "very worried" about ivory smuggling in Africa and particularly in Togo.

Johnson blamed "well-equipped and often heavily armed criminal networks" for the trade, adding: "Our country will not tolerate trafficking in objects of endangered species.

"This is why we, in close collaboration with some friendly nations including the United States, France and China, are having a serious crackdown.

"We shall also try to harmonise our strategies with those of other countries in the region."

A senior police officer in charge of tackling drug trafficking and money laundering in Togo, Kodjo Katanga Yeleneke, has said that "tonnes" of ivory have previously left Lome for Indonesia.

"The check on containers is very rigorous for some time now. All the containers must be scanned before sending them to the terminal for export," said one port customs officer.

Agents from the country's anti-drug trafficking and money laundering agency also carry out unscheduled checks in Lome, including shops, he added.