The right stuff: What makes a hero? 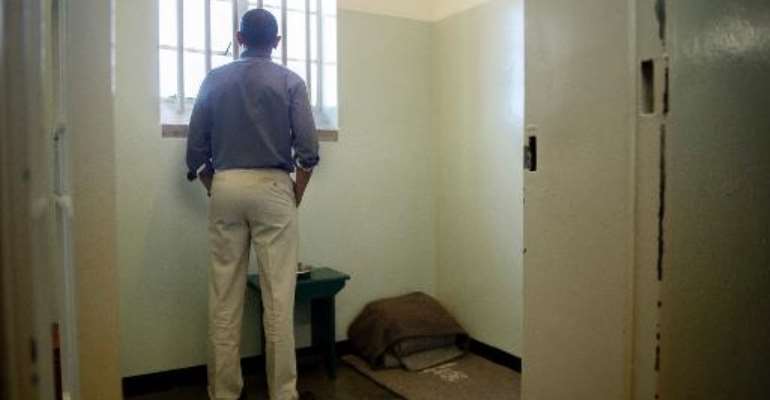 US President Barack Obama looks out the window from the cell where Nelson Mandela was once jailed on Robben Island, on June 30, 2013. By Jim Watson (AFP/File)

Johannesburg (AFP) - For US President Barack Obama and millions of people around the world, Nelson Mandela was a hero.

But what are heroes? Why do we need them? And will there be another Mandela, or is he the last of a breed?

Delving into these questions means starting with the word itself.

"Hero" is charged with mythology: it is rooted in the ancient Greek term for demi-gods like Achilles.

But it may also be used for fictional characters like James Bond or Superman, even athletes who achieve a remarkable feat.

This semantic stretch is a good indicator of our craving for super humans.

"Heroism is a central concept of culture and society," said Frank Farley, a lecturer at Temple University in Philadelphia.

"Throughout human history we have the hero and we have heroines -- literature is just rife with heroes, anti-heroes, heroism."

"A lot of the great heroes have the capacity of altruism, of generosity," said Farley. "They are giving people. They may give their life to others."

Mandela, for his part, had emphasised willpower.

"A man who would not break down even under the most trying circumstances," is how he described a hero in his autobiography "Long Walk to Freedom."

According to the experts, real-life heroes tend to come in three categories.

There are those who commit their lives to struggling against societal wrongs; those who put their lives at risk to save a stranger, say from an oncoming train or a burning building; and "professional heroes" like firefighters or police officers.

Heroes that fall into the first category, such as Mandela, tend to have one thing in common -- they overcame great adversity, said Elaine Kinsella of the University of Limerick in Ireland.

"Typically we do not want to emulate heroes due to the hardship and suffering they endured," she said.

This is one thing that makes a hero far more than a simple role model, someone whose life one would wish to imitate.

"Who would want to relive Mandela's life?" Kinsella asked rhetorically.

Mandela, who died Thursday aged 95, spent 27 years in jail under South Africa's apartheid regime for his leading role in the fight against its racist policies. He endured solitude, separation from his family and ill-health, suffering lung and eye damage caused by harsh prison conditions.

These experiences and ordeals are part of what made him unique: even if you could clone the man, you still would not have another Mandela.

Indeed, the more a hero suffers, the greater he or she is likely to be revered in consequence, say expert.

For psychology professors Scott Allison and George Goethals of the University of Richmond in Virginia, Mandela has nearly stellar esteem because of his almost-unimaginable triumph.

"When we've asked people to list their most inspirational underdog heroes, the name Nelson Mandela invariably appears more often than any other," they said in an email to AFP.

The need for heroes runs deep.

According to Kinsella, heroes give us a sense of security by guiding and protecting us. They make us feel better about ourselves by reminding us there are good people in the world. And they set an example of how we can live more harmoniously with others.

"Sixty-six percent of people we sampled said they had at least one hero," she said.

"The types of heroes we choose may have changed over time, but it seems there remains a human need to seek out the heroic among us."

"Of course he was exceptional, but the spirit of greatness that he personalified resides in all of us," Tutu said.

"We are made for goodness, for greatness. He embodied and reflected our collective goodness, he embodied our hopes and dreams."

Who will be the next globally-recognised hero after Mandela?

But they also say the heroic genre faces a challenge.

Mandela achieved his fame in the 1950s and 1960s, living a clandestine life before being jailed, becoming a "banned person" whose very image was outlawed by the South African regime. He became the prisoner without a face, something that added to the mystique.

These days, there seems little secrecy of any kind. Images and spin doctors are everywhere. And one's mistakes and indiscretions are instantly put in the public domain, remaining accessible forever to anyone with an Internet search engine.

But these dalliances became publicly known years, or even decades, after their hero status was already entrenched, said the experts.

In today's omnipresent social media, it would be much harder to keep one's peccadillos private -- and hero-making suffers accordingly.

"We can dissect behaviour in more detail today than in the past," noted Kinsella.