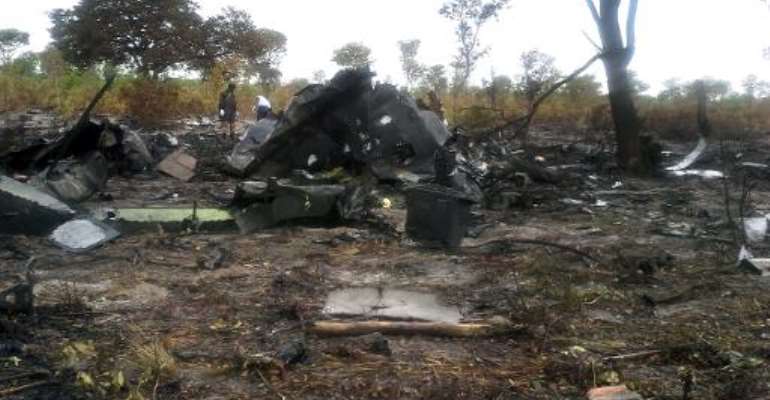 Burnt wreckage of a Mozambican Airlines plane on November 30, 2013 at the site of its crash in Namibia's Bwabwata National Park. By - (Namibian police/AFP)

Windhoek (AFP) - Thirty-one bodies were recovered Sunday from the wreckage of a Mozambican Airlines plane that went down in torrential rain in Namibia, police said, while the aircraft's black boxes were also found.

"We only discovered 31 bodies from the scene. We don't know yet about other bodies," police major Ben Shikongo told AFP.

Friday's crash in Namibia's remote Bwabwata National Park killed all 33 on board, of half a dozen nationalities, in one of the worst accidents in Mozambique's civil aviation history.

"It might be that they fell out while the plane was falling. We will have a clear picture after the DNA testing tomorrow (Monday)," Shikongo said.

The victims' bodies were being transferred by helicopter to the Namibian capital Windhoek from the crash site some 1,000 kilometres (60 miles) to the northeast.

An aviation officer who declined to be named described the crash scene as "gruesome", scattered with body parts.

Families were to be asked to identify the bodies at the police mortuary in Windhoek, once the police have carried out DNA testing, Shikongo said.

The plane, which went down en route from Mozambique to Angola, was a Brazil-manufactured Embraer 190 aircraft and the newest plane in the airline's fleet.

There were no survivors among its six crew and 27 passengers.

Mozambique was to declare a national period of mourning for the victims, who came from Mozambique, Angola, Portugal, France, Brazil and China.