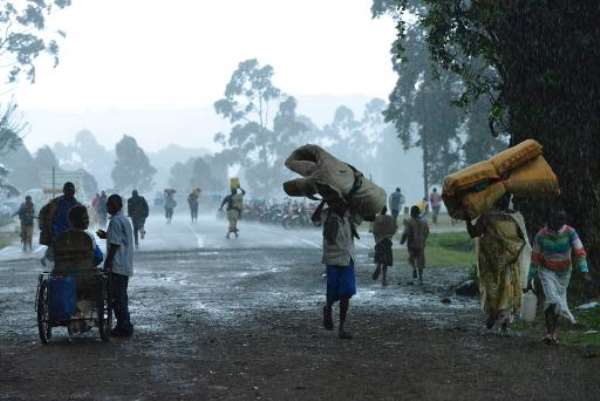 Kampala (AFP) - The Democratic Republic of Congo and defeated M23 rebels are set to sign a peace deal on Monday in what diplomats hope will be a key step in efforts to end decades of war in the Great Lakes region.

The rebels, one of many armed groups operating in the mineral-rich but impoverished east of the DR Congo, have been routed by the national army, who are backed by a 3,000-strong special United Nations intervention brigade.

Allegedly supported by neighbouring Rwanda and Uganda but seemingly abandoned by their sponsors due to international pressure, the M23 announced last week that their 18-month insurgency was over. They are expected to put this in writing in Uganda on Monday.

"Our hope is that we have a firm commitment from the M23 rebels to renounce their use of arms," said DR Congo government spokesman Lambert Mende.

The M23, a mainly ethnic-Tutsi force who mutinied from the Congolese army, have not confirmed Monday's meeting. But with no more military leverage they are seen as having little room for manoeuvre.

The agreement is expected to settle the fate of about 1,500 M23 fighters who have crossed into Uganda and are languishing in camps along the border. Uganda has refused to hand them over to the DR Congo.

Around 100 more injured rebels have crossed to Rwanda.

Mende said the rebels would be dealt with "case by case" -- with many rank-and-file fighters expected to be given the option to return to the army.

More complicated is the fate of around 100 M23 commanders. These include M23 leader Sultani Makenga, accused of participating in several massacres, mutilations, abductions and sexual violence, sometimes against children.

"The rebels, by signing, will effectively be surrendering. From our side, even though we have won and triumphed, we will still respect what is on the table," said Francois Muamba, a DR Congo delegate to the talks.

The UN's special envoy to the Great Lakes, Mary Robinson, told AFP the accord would be "a very important step for peace".

Speaking to AFP on Sunday, she said the deal will also be followed by operations to neutralise other rebel groups in a concerted effort to end one of Africa's most brutal and longest-running wars.

This would be "new and welcome news for the people... who have tolerated or have had to endure for far too long these armed groups, with the raping and re-raping, with the displacement of people," she said.

"It has been intolerable, and now there really is hope," said the former Irish president.

But even if a deal is signed, stabilising eastern DR Congo will not be easy. Previous peace deals for the region -- including with the M23 -- have foundered because they were not implemented or did not address underlying problems such as refugees and land ownership.

She said the priority would now shift to defeating the DR Congo-based Democratic Forces for the Liberation of Rwanda (FDLR), a descendant of Hutu extremist groups that carried out the 1994 genocide in Rwanda.

The Congolese government has already vowed a new campaign to eradicate the group.

Rwanda's minority Tutsi-led government views the FDLR as a major security threat, and dealing with the group is seen as crucial to addressing the neighbouring country's concerns and preventing the emergence of yet another Rwandan-backed proxy.

But not everyone in the DR Congo is convinced.

A group of Congolese NGOs and civil society groups last week dismissed the peace negotiations as "nonsense", denounced the impending "integration of criminals and foreigners" back into the army and called Uganda an "aggressor".

A researcher for the Enough Project, a US group campaigning against war crimes, said Rwandan and Ugandan meddling could still scupper a deal.

"It must be noted that Museveni does not hide his feelings for the M23 when he demands a general amnesty and their unconditional reintegration," Fidel Bafilemba said.

"The fact that Uganda says it won't extradite the rebels leads one to think there could be a plan B to rebuild the rebels."