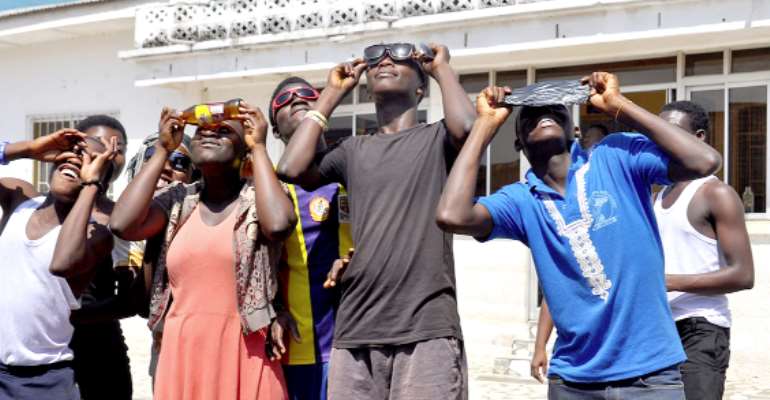 Ghanaians yesterday cut another slice of history when they observed a partial eclipse of the sun, the second to occur in seven years.

Many people abandoned many social activities momentarily to watch the partial eclipse of the sun which began at 1.22 p.m.

From Sunyani, Samuel Duodu reports that  residents of Sunyani came out of their homes to watch the eclipse.

The phenomenon occurred for about 20 seconds and some children in the company of their parents and adult relatives who had only one of the eclipse shades among them had to pass it on to one another to have a look at it.

Others also fetched water in basins to catch a glimpse of the occurrence.

From Koforidua, Nana Konadu Agyeman reports that several curious residents of the town who did not have the shades to watch the eclipse were seen gathered together in the streets taking shades from others to watch the unfolding 'romance between the sun and the moon'.

In some extreme cases, curious sky watchers filled basins with water to watch the unfolding spectacle in the water.

In other areas of the town, the people expressed dissatisfaction at not seeing a total eclipse as they had done in 2006.

Well informed residents were seen and heard educating others on the difference between a total and a partial eclipse.

In Sekondi/Takoradi, people were disappointed at not seeing a total eclipse, as many claimed they had invested in special glasses to enjoy the spectacle, reports Moses Dotsey Aklorbortu.

The Skyy-Power Media Group, which took delivery of the glasses designed purposely for the eclipse, sold more than 3,000 pieces at GH¢4 per one.

Interestingly, a few hours to the stipulated time, one of the sales agents, Emmanuel Ohene Gyan, increased the price to GHc5, but people still rushed for them.

At 1 p.m. when the weather became a little dark, the demand became high and people were very anxious not to miss the opportunity to watch the eclipse.

Benjamin Xornam Glover reports from Bolgatanga that after watching the spectacle,  a resident, Ms Regina Sundong, simply remarked, "This is a beautiful scenery by all standards."

She was among several residents of Bolgatanga who watched the phenomenon that saw the moon passing between the sun and the earth, causing a partial blocking of the sun's rays.

Some students of the Bolgatanga Girls' Senior High School who took turns to watch the phenomenon by sharing a single solar eclipse shade available marvelled at the sight of the sun.

Ms Elizabeth Anaba,  a form one student, said she was happy to have  experienced the "once-in-a-lifetime' occurrence, adding that it was an experience that would live with her for a long time.

Anxious residents of Cape Coast stood with heads up looking into the sky with their eclipse shades, reports Shirley Asiedu-Addo

Mothers helped their children to put on the shades to enable them to keep track of the historic happening.

Many had closed from church and stood watching the skies.

At exactly 1:19 p.m. the sun disappeared from the sky.

"This is beautiful but I expected a darker sky," remarked Ms Lois Odame of the University of Cape Coast.

The sky was cloudy and without the sun, as if it was going to rain.

Then at around 2:20 p.m. the sky welcomed the sun and the eclipse was over.

Many said they were excited to have seen it happen twice in their lifetime.

Kweku, a mechanic, said, "I feel blessed to be part of this. I think it's a message from God."

The much anticipated solar eclipse failed to make any impact on residents of Tamale, as not even a single person was seen making any effort to watch the phenomenon during its peak hours, reports Marcelinus Dery.

Unlike the 2006 solar eclipse which generated so much interest in the city, this time round the Daily Graphic did not notice people making attempts to take a look at the phenomenon.

Around 1:22 p.m., the announced time for the commencement of the eclipse, the Daily Graphic took a stroll around town to see how people were on the look-out for the event, but people just went about their businesses without even making attempts to observe the sun which had become unusually mild.

Sahadatu Mankama, a resident of Choggu, said she did not even notice the event had taken place.

She said unlike the 2006 event when the place became a little dark, this year's event was not so, as it was only the intensity of the sun's heat that reduced.

Another resident, Yahaya Muntawakilu, expressed disappointment at the event, saying what happened was not what it was said to be.

He said no darkness whatsoever was experienced and the event just happened like a mild cloudy day.