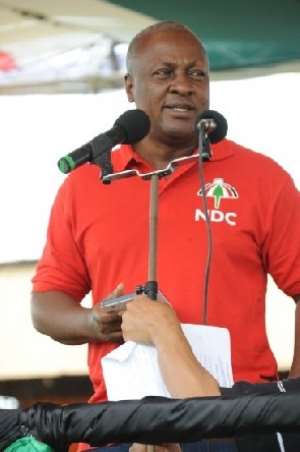 Former Member of Parliament for Asikuma-Odobeng-Brakwa Constituency in the Central Region, Paul Collins Appiah-Ofori has hinted that, any attempt to completely eradicate corruption in the country will be unsuccessful unless a sitting president vows to lead the crusade.

According to him, apart from Ghana's first President, Dr. Kwame Nkrumah who solely fought against corruption, “no other president made the attempt to get rid of corruption”.

The Anti-corruption campaigner however noted that President Mahama should be held responsible for the increase in corruption within the public sector since he has failed to sanction government officials implicated in graft cases.

“…Kofi Abrefa Busia (Prime Minister of Ghana from 1969 to 1972) was not able to fight corruption same as Jerry John Rawlings and Hilla Limann. John Agyekum Kufour and late Prof. John Evan Atta Mills did nothing to fight corruption. As for President Mahama, he can never fight corruption. He doesn't have the guts to fight it. He only wants to satisfy his party (NDC) members,” he said.

PC Appiah-Ofori was reacting to the latest corruption perception report issued by Gallup which purportedly ranked Ghana the third most perceived corrupt country among 129 countries with free press. Ghana scored 89 percent behind Czech Republic and Lithuania.

The poll was conducted between April and May 2012 on perception of countries with free and limited press around world and the Gallup report comes on the back of series of investigative reports pointing to corruption in various sectors.

Speaking on Asempa FM, Mr. Appiah-Ofori strongly challenged the president to fight corruption as stated in the 1992 constitution.

“Article 35 (8) of our constitution says, the State shall take steps to eradicate corrupt practices and the abuse of power. If the state is to take the steps, then it's the head of the state who must lead the fight against corruption, but is he doing that?” he quizzed.