Prez Mahama is naked if Stan Dogbe is managing him - Bagbin 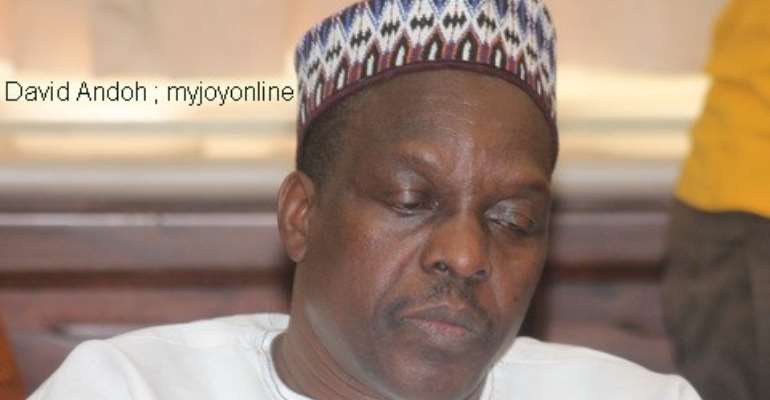 Former Majority Leader Alban Sumana Bagbin appears to have taken off his gloves, taking the fight to Presidential Staffer Stan Dogbe, whom he accuses of insulting him.

Mr Bagbin said it was shocking that that President John Mahama, known for his benign and amiable qualities, would have “people like Stan Dogbe following him around.”

'If such characters as Stan Dogbe, are those managing the president, then our president is naked, very naked!” he stated.

The former Majority Leader probably courted the anger of Mr Stan Dogbe when he told Joy FM that he had so far not seen any commitment of political leadership in the fight against corruption and that he had decided to advise the president because attempts to meet with him had failed.

Replying the experienced legislator, the Presidential Staffer wrote a treatise in which he accused the MP of lying.

“But why must he lie and expose the President of our beloved country and leader of our dear party to public ridicule when he knows very well that he was only spewing out falsehood against an innocent man,”? he asked.

“What concrete actions did Hon. Bagbin take as Minister for Health when issues of concern arose in Korle Bu? If he had acted decisively and in the manner he is spewing out now, would we have been where we are”?, he asked, referring to reports of corruption at Ghana’s premier teaching hospital.

The Kaleo-Nadowli Member of Parliament, responding to Mr. Dogbe’s charge on Accra-based OK FM, said, “What he (Stan Dogbe) ignorantly doesn’t know is that the minister doesn’t take decisions.”

All proposed actions, he said, are discussed with the president who ultimately takes the decisions.

He said the reforms he brought about at Korle Bu when he was Health Minister were there for all to see.

“They have been in office since June last year and they are still in first gear,” Mr. Bagbin parried, alluding to the President’s statement a couple of weeks ago that he was in his first gear and that things would get better by the time he is in his fourth gear.

The MP said he had been saddened by what the president, a likable person by all standards, had become. For him, it was a complete misnomer for a decorous person as President Mahama to have Mr. Dogbe as one of his confidantes.

“You all know Stan Dogbe, he is the one and he has stated that he is the first person the president sees every morning and so he is one of those managing the president; Stand Dogbe has been in the media before and he worked at Joy FM before; we all know him; you can even see the language he has used against me; in all my statements, I never insulted any single person; his statement in response is a complete insult to me and they say they have a code of conduct for the executive which was launched recently; but that is somebody very close to the president coming out and attacking his very senior member in governance; I who led the president for many years, and anchored him and supported him from his constituency to the national [level] to ensure that he is president this is the response from them against me!”

According to him, the presidency had lost touch with the aspirations of the people who voted for the governing National Democratic Congress in the last elections.

“My hopes are being dashed, that is why I am standing up to ensure that the right thing is done,” he stated.

He dismissed suggestions that there was bad blood between him and the president over his [Babgin's] presidential ambitions.

“Those who are saying I have presidential ambition are saying it out of ignorance;” because it is not possible to have a succession of presidents from the north, he maintained.

He said he led the campaign of the NDC in 2008 across the country, assuring Ghanaians that things would be different if the party came to power.

“Is there a difference”? he asked.