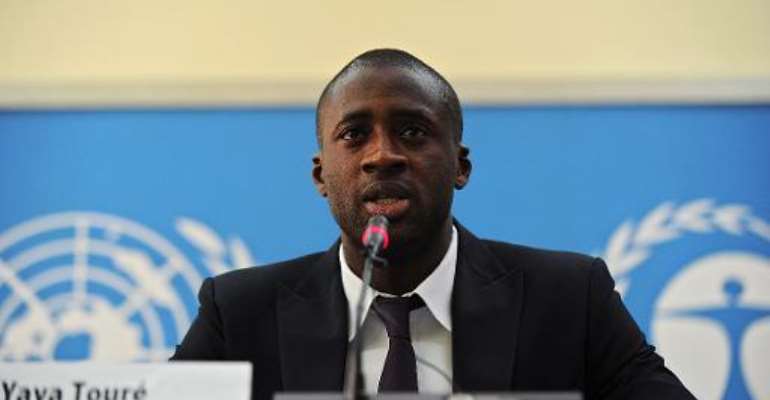 Ivory Coast's football player Yaya Toure speaks during a press conference as he was appointed the United Nations Environment Program goodwill ambassador at the UNEP headquarters in the Kenyan capital Nairobi on October 29, 2013. By Tony Karumba (AFP)

Nairobi (AFP) - Reigning African Footballer of the Year Yaya Toure, star of Manchester City and Ivory Coast, warned Tuesday that the slaughter of elephants for their ivory was threatening their very existence.

"Poaching threatens the very existence of the African elephant and if we do not act now we could be looking at a future in which this iconic species is wiped out," Toure told reporters, as he was appointed an ambassador for the United Nations Environment Programme (UNEP).

"Ivory Coast's national team is named 'The Elephants' after these magnificent creatures that are so full of power and grace, yet in my country alone there may be as few as 800 individuals left," Toure added.

Toure, speaking at UNEP headquarters in the Kenyan capital, said he wanted to help combat the illegal ivory trade that sees thousands of elephants poached each year.

Poaching has risen sharply in Africa in recent years and the illegal ivory trade has tripled since 1998, according to UNEP.

Large-scale seizures of ivory destined for Asia have more than doubled since 2009 and reached an all-time high in 2011, UNEP added.

Ivory trade is banned under the Convention on International Trade in Endangered Species of Wild Fauna and Flora (CITES).

Africa is now home to an estimated 472,000 elephants, whose survival is threatened by poaching as well as population expansion and increasing urbanisation encroaching on natural habitats.

The illegal ivory trade, estimated to be worth up to $10 billion (seven billion euros) a year, is mostly fuelled by demand in Asia and the Middle East.

Elephant tusks are used to make ornaments and rhinoceros horns are used in traditional medicine.