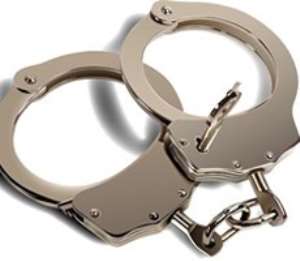 The Security Supervisor of Jidem Security Services Company, Stephen Nana Yaw Nketiah, has been arrested by the police after he had allegedly led some of his junior officers to siphon a large quantity of diesel from the state-owned Bulk Oil Storage and Transport (BOST) Company depot in Kumasi last Saturday night.

The four junior security officers of the private security company, however, managed to escape by jumping the security wall and the police have mounted a search for them.

Four big drums and 22 jerry cans were yet to be filled, while a KIA truck, with the inscription: 'Respect the Police', which the suspects used, was left behind at the scene.

The breaking of the syndicate came at the time BOST officials had complained of huge losses through dubious means at the various levels of the company's operations.

The uncovering of the act followed a tip off by the Disciplinary Committee Chairman of the Ashanti Regional Tanker Drivers Union, Mr Kwabena Ebo, who happened to be in the vicinity of the depot at the time that the alleged criminal act was taking place.

Rev Ameyaw said Jidem Securities had been contracted by BOST, the national transmitter of petroleum products, to provide daily security services at its depot in Kumasi.

The engagement of the company was part of a high level security control plan for all of BOST depots and transmission lines to protect life and property.

The security measures at the Kumasi Depot were used as a pilot and the success chalked up had necessitated expansion to other control rooms of the company.

Rev Ameyaw said around midnight last Saturday, when the information got to his outfit from the informant, he personally led men to the depot.

On reaching the main gate to the depot, the door was closed, while the security chief argued with the informant.

He stated that the security chief, who admitted leading the illegal act, led the police to the crime spot where the drums, both filled and unfilled, as well as the truck, were found.

The police have impounded the truck and the fuel.
The Ashanti Regional Depot Manager of BOST, Mr Nicholas Yaw Samari, who also spoke to the Daily Graphic, commended the efforts of the tanker drivers' union for helping in the breaking of the syndicate that had caused the company to lose huge revenues.

He pledged to reward the informant for a good job done to motivate others to work hard to check any kind of rot that might be going on in the area.

The depot manager said for starters, he would recommend to the management of BOST to change the security company operating at the depot, since the security men could not be trusted any longer.

He said there was the need for an effective and efficient security system to be put in place because currently he, as the depot manager, had no direct supervision over the security personnel in Kumasi.