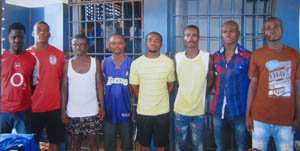 Eight suspected armed robbers arrested by the Ashaiman Divisional Police Command have been remanded into prison custody by the Tema Circuit Court A.

They were remanded by the said court presided over by Ms. Lydia Osei Marfo after pleading not guilty to the charges preferred against them.

The robbers, who had been on police wanted list for over six months, were said to be behind several robberies in the Municipality and its environs using deadly weapons.

Prosecuting, Chief Inspector Adolphus Otchere said on June 30, 2013 at about 11:00pm, the robbers stormed a house at Zenu near Community 22 Annex and succeeded in robbing its occupants at gun point.

He noted that the robbers made away with eight mobiles, a laptop, two desktop computers, Ipad, two DSTV decoders and jewelleries.

Chief Inspector Otchere further indicated that again on September 12, 2013 at about 1:00am, the armed robbers attacked a foreign national and his family at Ashaiman Lebanon near Pink Lady, where they took away CFA 10 million, two laptops and seven mobile phones with two of the victims sustaining gunshot wounds.

He said complaints about the two incidents and other robberies were reported at the Ashaiman Lebanon Police Station and an investigation machinery was set up to bring the perpetrators to book.

According to him, during investigations, police noticed that the robberies were committed by the same gang and upon a tip-off, Nathan was arrested.

He explained further that a search on Nathan revealed a mobile phone which was later identified by one of the robbery victims as being his, adding that further investigations led to the arrest of some members of the gang.

George and Kwaku, both members of the gang, were arrested by the Oda Divisional Police from their hideout at Akyem Akroso near Oda where they were enjoying their booty.

They were arraigned and remanded by the Tema Circuit to reappear at a later date to allow for further investigations into the case.

Election 2020: Only Uniform Personnel Will Be Deployed – Gha...
42 minutes ago