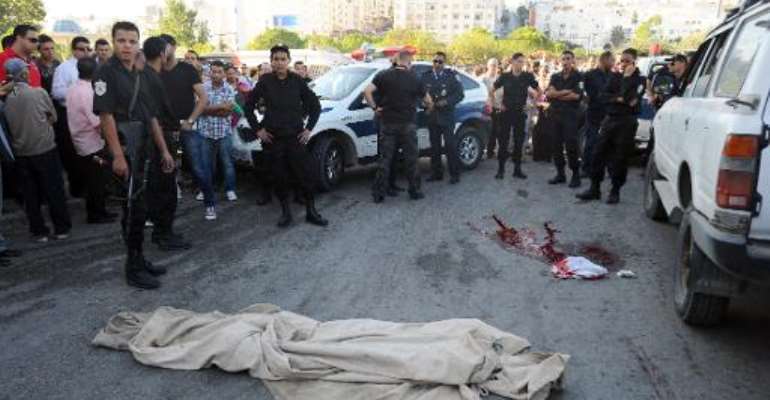 Police inspect the scene of an exchange of fire between police forces and members of a Salafist group on October 25, 2013 in the the Ennasr district in Tunis. By Fethi Belaid (AFP)

The repeatedly delayed national dialogue aims to break months of deadlock between the Islamist-led government and the mainly secular opposition that has paralysed Tunisia's political transition nearly three years after the January 2011 uprising.

"Today is an important date in the history of Tunisia. The whole world is watching and waiting for us to succeed," the powerful UGTT trade union, which brokered the talks, said on its Facebook page.

"We have registered our first success with the official launch of the national dialogue," its chief Houcine Abassi was quoted as saying at the start of the closed-door negotiations.

"We will work together to implement the roadmap according to the envisaged timeframe and agree on the constitution, and I hope we will get there quickly," he added.

Amid growing doubts that the opposition would attend a new attempt to launch the negotiations on Friday, Larayedh sent a written commitment to mediators that his government would resign.

The pledge drew a positive reaction from opposition members, and the dialogue began at around 1600 GMT at the human rights ministry, following a delay of several hours.

"We are committed to all chapters of the roadmap and our MPs will return to the National Constituent Assembly as soon as the dialogue has started," said Ahmed Nejib Chebbi, a prominent figure in the opposition Republican Party.

Previous efforts to launch the talks on October 5 and 23 failed, most recently when the opposition rejected a statement by Larayedh as "ambiguous," prompting the Ennahda party prime minister to issue a clarification.

"Last night (Thursday) on television, Tunisia's prime minister reiterated his government's pledge to step down according to the quartet roadmap, following the implementation of the preceding milestones in the roadmap," Ennahda said.

The opposition had refused to join the talks until Larayedh gave a "clear and explicit" undertaking that his government would step down within three weeks of the dialogue's launch.

'First democracy in the Arab world'

The three week timeframe was stipulated in the roadmap brokered by the UGTT and three other mediators between the government and the opposition, at the end of which a caretaker cabinet of technocrats is to be appointed.

The blueprint also sets a parallel one-month timeframe for the adoption of a new constitution and electoral laws, and a timetable for fresh elections, which the government is insisting must also be adhered to.

"The train to end the crisis has been put on track today and it will arrive at the station in a few months to crown our (2011) revolution with free and fair elections, which will produce the first democracy in the Arab world," Ennahda's veteran leader Rached Ghannouchi declared as the talks began.

Bitter divisions between the Ennahda-led government and its secular opponents have blocked progress on those key political issues, hampering Tunisia's democratic transition.

Friday's breakthrough comes amid a tense security situation in Tunisia which was still marking three days of national mourning for six policemen killed in a clash with suspected militants in the central Sidi Bouzid region on Wednesday.

Since the uprising that ousted Zine El Abidine Ben Ali's regime, the country has been rocked by violence blamed on jihadist groups suppressed under the veteran strongman.

Early on Friday morning, police shot and wounded a suspected militant after a car chase in a Tunis suburb, but the interior ministry later said that those travelling in the car were "drunken youths" with no links to terrorism.

Public anger has been mounting over the death toll from jihadist violence, which saw two Ennahda offices torched on Thursday as seven slain police officers were laid to rest.

The failure of the government to rein in militants has been one of the principal grievances of the opposition, which has boycotted work on drawing up a new constitution since the killing of one of its MPs by suspected jihadists in July.

The government has admitted it has struggled to contain the militants but blamed a lack of resources.