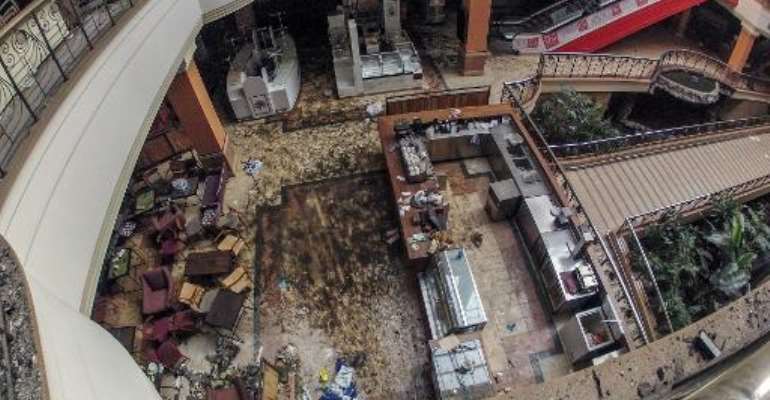 The interior of the Westgate Mall in Nairobi pictured on September 30, 2013 after the deadly assault by Islamist gunmen on September 21, 2013. By James Quest (AFP/File)

Nairobi (AFP) - Bodies have been retrieved from Kenya's Westgate mall following a brutal siege by Islamist gunmen, police said Wednesday, as the extremists warned "rivers of blood" would flow in fresh attacks.

Kenya's President Uhuru Kenyatta has said a formal inquiry will be launched into apparent security lapses during the deadly assault last week on the shopping complex, in which at least 67 were killed, with 39 more listed as missing.

Shopkeepers have complained their stores in the upmarket centre have been completely looted.

Somalia's Al-Qaeda linked Shebab, who claimed responsibility for the attack, threatened Wednesday to step up militant attacks against Kenya, after Nairobi refused to pull its troops out of Somalia.

"We will strike Kenyans where it hurts the most, turn their cities into graveyards and rivers of blood will flow in Nairobi," the Shebab said in a statement.

"The Kenyan government's decision to keep its invading force in Somalia is an indication that they haven't yet learnt any valuable lessons from the Westgate attacks," the extremists added, warning that Kenya was "inviting unprecedented levels of insecurity, bloodshed and destruction."

Part of the mall's rooftop carpark collapsed after explosions and a fierce fire, leaving the key area where the insurgents are understood to have made their final stand -- along with possible hostages -- buried under tonnes of concrete slabs and rubble.

As many as nine bodies have been retrieved from the charred rubble of the mall, some badly damaged in the intense fire that gutted part of the complex.

"Some of the bodies are not recognisable and need DNA testing to get them properly identified, some are badly damaged," a senior police source said.

It was not immediately clear if the retrieved bodies were already included in the official toll of 67 -- including 61 civilians and six Kenyan troops -- or if they could be among the 39 people listed as missing by the Red Cross.

In addition, Kenyan officials have said five attackers were killed, but it is not clear if all -- or any -- of those bodies have been recovered.

Families of those missing have been called to the central mortuary to provide DNA samples to help identify unclaimed bodies, officials said.

Kenyan and foreign investigators continue to comb the carcass of the mall for clues on the perpetrators and their operating methods.

"The conditions of work in the mall are pretty difficult, there are piles of concrete and cars," said a security source involved in the search. "It's likely there are still a lot of corpses to retrieve and to identify from the rubble."

A joint parliamentary security, defence and foreign relations committee investigating the attacks visited the mall on Monday afternoon, picking their way through shattered glass and congealed blood in the main hall.

Asman Kamama, the chairman of the joint committee, said the team of lawmakers were expecting to quiz security chiefs later in the week. The probe is expected to last at least another month.

Kenyatta on Tuesday said troops had been sent to Somalia to restore order to their anarchic neighbour, and they would not leave until the job was done.

"We will not be intimated, we will not be cowed," Kenyatta said. "We will stay there until they bring order to their nation."