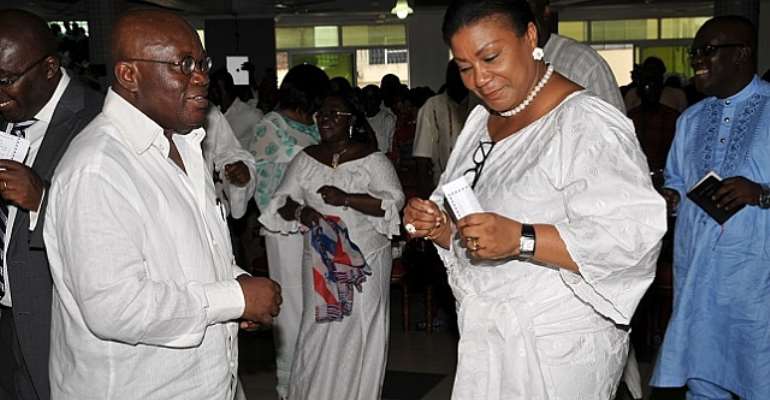 The last in a series of Thank You Meetings organized by the leadership of the New Patriotic Party (NPP) to show gratitude to its teaming members for the various roles they played in the 2012 Election Campaign and subsequent Presidential Election Petition, was held on Saturday at Ho, the Volta Regional Capital.

The Thank You Meetings which was began by Presidential Candidate for the NPP in the 2012 Election, Nana Akufo - Addo last Sunday in Accra, was held in all ten regional capitals across the country and was also used as an opportunity to dilate with the party in the regions on the way forward.

During the meetings, the various constituency and regional executives were tasked to submit ideas, proposals and observations on the party, its organizational structure, campaign and whatever in their view the party should be doing or not doing in order to capture power in 2016.

The executives have been given two weeks to submit these proposals to their various regional offices for onward forwarding to the National head office. These submissions would ensure that the party is able to put up the best strategy for each polling station and constituency.

Speaking in Ho, Dr. Mahamudu Bawumia, 2012 Vice- Presidential Candidate for the Party, on behalf of Nana Akufo - Addo and on his own behalf thanked the rank and file of the NPP in the Volta Region and the country at large for the tremendous effort they put in the 2012 Electioneering Campaign of the Party. He also thanked the party for supporting fully, the decision to challenge the declared outcome of the December Election, including the massive effort in gathering over 24,000 Pink Sheets which had ensured that the Party was able to put up a strong case at the Supreme Court.

Dr. Bawumia called on the rank and file of the party to do everything possible to maintain and build upon unity in the party.

'Factions which are built around personalities only mean that in the contest for power, some of the best talents would either choose to sit on the fence or be left out of the effort which would ultimately affect our chances in one way or the other. The more united we are, the more competitive we will be', he said.

He appealed to the Party that as the various internal contests begin, they should always remember never to speak ill of any fellow NPP member as that would only lead to cracks in the party.

Dr. Bawumia said that it was critical for the nation that the NPP assumes the helms of affairs in the country after the 2016 Election to end the unprecedented economic mismanagement and incompetence of the five year old NDC administration.

He noted that, for example, despite the huge resources available to the NDC government, including for the first time, resources from commercial oil production, the NDC administration had in just 5 years managed to quadruple Ghana's total debt stock from independence to the end of 2008 when the NPP left power.

He said that the 15.6billion Ghana cedis the NDC had added to Ghana's debt over the last year, was much more than the GHc9 billion debt, accumulated from 1957 to 2008, the NDC inherited in 2009.

Chairman of the NPP, Jake Obetsebi-Lamptey also appealed to the members of the Party to do everything within their ability to help unite the party.

He called on the members of the Party to be bold to call to order leaders whose supporters insult and concoct stories about other contenders and let such leaders know that because of the conduct of their supporters, they will not be voted for.

He appealed to those who might be slighted in the public domain not to reply such insults with insults but to ignore such insults and at best, correct the fabrications.

Two persons accused of killing 11-year-old boy at Kasoa to b...
46 minutes ago

Akufo-Addo can’t even bath in the Presidential jet, it's not...
46 minutes ago